Five school districts were established in 1787 with schoolhouses in each district.  New districts were added in 1806, 1822, and 1826.  Westford Academy was incorporated in 1792, and a two-story late Georgian style Academy Hall was built in 1794 to the west of the common. By approximately 1870 to 1908 when the town was divided into ten school districts, each containing its own district school.  With the exception of the Cameron and Graniteville school, these building had only one or two rooms and ten to twenty students.  Attendance fluctuated depending on whether or not the male student was needed at home to help on the farm or the female student was needed as baby sitter when a new sibling arrived, as mandatory attendance was not yet a requirement.  The schools were poorly lighted, poorly heated and came with an outhouse.

Eventually the District Schools were closed and students were gathered into centralized schools such as the Sargent School, the Frost School, the Forge Village School and eventually the Nab. school.  In spite of all the deprivations, students learned their lessons and many continued their education at Westford Academy. 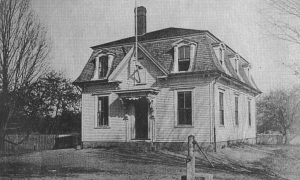 School House #1, the Tadmuck School and/or the Center School, was built in 1874 and was a two-room schoolhouse.  It was used until the Frost school opened in 1908.  In 1909 voters authorized the building to be sold at public auction and was purchased by the Spalding Light Cavalry, Troop F, MVM.  Troop F in turn made a provisional gift of the building in 1930 to the Tadmuck Women’s Club and by 1953 a full gift.  It was used until 1983 by the Tadmuck Club.  After that, until 1994, it was used by the Westford Senior Center.  Then in 1995, the Kusmins purchased it from the town and remodeled the building which is at 20 Boston Road.  (Day photo) 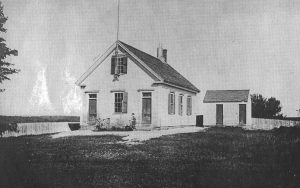 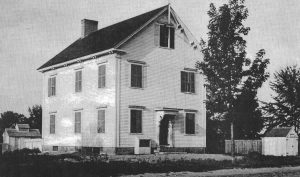 School House #3, the Forge Village School and/or the Cameron School, was built in 1871 as a two-room schoolhouse.  Prior to this time, students had attended school in the brick school (1851-1871) at the corner of Pleasant and Pine Streets.  In 1908, voters were asked to approve expenditures involved in adding a room to the Forge Village school.  The Cameron School was one of the last to close, doing so in 1992.  It is now home to the Cameron Senior Center.  (Day photo) 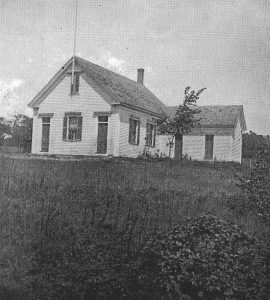 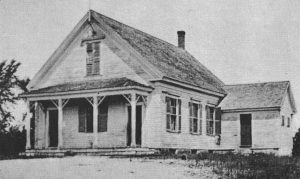 School House #5, the Parkerville School, at the corner of Carlisle and Concord Roads was built in 1880 and used as a school until 1928.  The families in Parker Village then began using the school for their Nonset Club meetings.  Today, thanks to the Friends of the Parkerville School, it is again a place where students come and spend a day experiencing life in the one-room schoolhouse.  (Day photo) 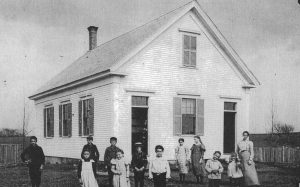 School House #6, Minot’s Corner School, was built in 1873 and closed in 1908 when the Frost School was opened.  As early as 1897, voters were asked to approve a motion to close the school and students send to the Center School as average enrollment was only 12 pupils that year.  In 1915 it was sold for $500. and made into a home at the Toy Turkey Farm.  Then in 1985, it was moved to make way for the shopping center where Market Basket is located.  Its new resting place is at 2 Fieldstone Drive and is owned by the Kopsers.  (Photo courtesy of Mrs. Helen Garrigan) 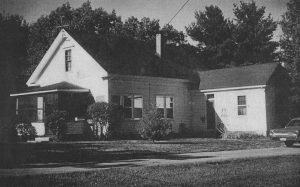 School House #7, the Nabnasset School, was built in 1873 and used as a school until 1914.  In April 1916, the Nabnasset schoolhouse was bid off to George C. Moore of North Chelmsford and Brookside for $190 (Westford Wardsman).  This building was also converted to a residence, and around 1960, the Talbot’s purchased it from the Hadley’s.  It is located at 73 Oak Hill Road.  (Photo from Kennedy collection; taken by John Sanders) 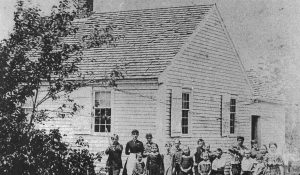 School House #8, Long Sought For School, originally located on Tenney Road, this school was built in 1885.  In 1897 average enrollment was 10.9 pupils, and so by 1898, voters were asked to approve a motion to close the school and transport the pupils to the Wright School.  In 1909, the town voted to sell the schoolhouse at public auction.  It was purchased by George Burke for $405.  Then in 1941 it was sold again, and this time it was purchased by Albert Picking who moved it to his farm (now Meadow Brook Farm) on Gould Road and used as a blacksmith shop and lastly as a storage shed.  Children’s names associated with this school are Blodgett, Burke, Dane and Chandler.  (Photo courtesy of June Kennedy from the J.V.Fletcher Library Collection) 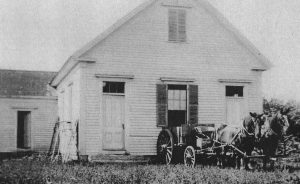 School House #9, Wright or Lyon School, located on at 127 Groton Road.  When this schoolhouse closed, students went to the Sargent School.  While empty, it was used by the Fortnightly Club.  Eventually it was auctioned off and  purchased by Horace and Edwin Gould who remodeled it into a two-family residence.  (Photo from the Kennedy collection) 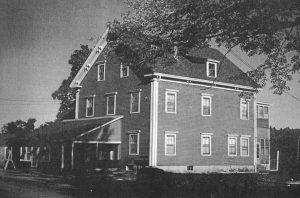 School House #10, Graniteville School, was built in 1870 as a four-room schoolhouse and is still located at 88 N. Main Street.  After it closed in 1884, it became known as the Sudak Market; today it houses several apartments.  Children then went to the Cross School (Sargent School). (Photo from Kennedy collection; taken by John Sanders) 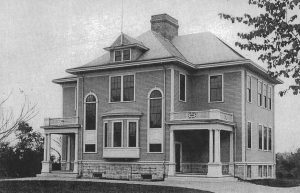 The Frost School was built in 1908 to consolidate several of the district schools.  It was named for William E. Frost who was preceptor at Westford Academy from 1872 – 1904.  It closed in 1992.  Located at 73 Main Street, in its new life, it now houses a daycare program.  (Photo from the Kennedy collection; taken by Edna MacDougall) 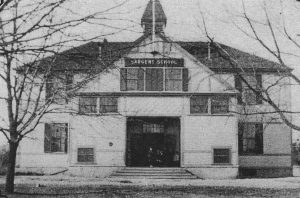 The Sargent School.  Located on Cross Street, the school was originally called the Cross School when it was built  in 1884.  In 1908 it was re-named the Sargent School.  Enrollment was a surprising 117 students in 1897.  The Sargent School closed in 1975.  Today the building is used for senior housing.    (Photo from the Kennedy Collection)

Westford Schoolhouses Still in Use

Westford Academy outgrew its original building, and in 1897 a second Academy building was constructed on Main Street. The highly ornamented building, designed in a late Victorian Richardsonian Romanesque style, is unique in Westford. The ell at the back of the building was added in 1928, the year the town purchased the Academy from the Westford Academy Board of Trustees. The building now serves as the Roudenbush Community Center.

The third Westford Academy building, now Abbot School, was built in 1955, followed by the fourth in 1973, with a significant enlargement in 2000-01.