“Center.  Mr. and Mrs. George F. White and son Forrest were in attendance on Tuesday at the big fair in Springfield, where some of Mr. White’s registered Ayrshires were among the cattle exhibits.  E. J. Whitney has also been in attendance at this fair this week and also visiting kinspeople in Springfield.

“The farms with silos are busy getting them filled this week.

“As a commentary on the persistent damp, rainy kind of weather last week morning glories in one garden kept open and unwilted for several days at a time.

“Doings of the State Guard.  When the alarm was sounded last week Wednesday Westford’s Company H of the 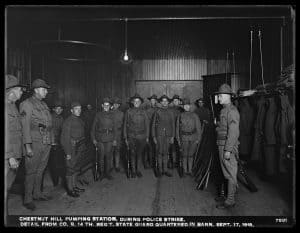 state guard assembled at the town hall and almost full ranks were carried to Lowell by trucks and went to Boston on the 6:56 train.  They marched through the streets to the South armory whence they were carried by trucks to police station 17 in West Roxbury.

“On Sunday they were taken back to the South armory and given a change of beats; this time between the South station and Boston common.  In the meantime they had lost their captain by resignation and the last transfer was made under their new captain, Edward Fisher.…

“Saturday was its red letter day when over thirty men, original members of the company, whose terms of enlistment had expired, and who therefore were not obliged to be on duty, signed up again at the West Roxbury police station.  That is the kind of feeling through the state guard as to ‘Boston affairs.’  This took in all the men whose enlistment had expired.

“Here are two incidents bearing on the feeling of old military men on Boston affairs.  Edward Fisher, who was major of the Lowell battalion of the state guard and received his discharge at its reorganization a few months ago, was last Wednesday morning signed up with a Lowell company on its way to Boston and was a buck private that night.  Saturday he was captain of Company H of Westford, whose captain had resigned….

“About Town.  John A. Taylor left last Saturday for Grand Forks, N.D., after an absence of one year to assume where he left off teaching at the University of North Dakota.

“The Old Oaken Bucket farm has a stalk of popcorn with five ears on it and opportunity for the sixth.

“Graniteville.  A committee of young men held a gala day at the Abbot playground here last Saturday afternoon, during which a good list of sports were run off, including a ball game between the married and single men.  The single men won by the score of 8 to 7.  In the evening a social dance was held in the Abbot clubhouse, with excellent music by Hibbard’s orchestra, of Lowell.  During the evening Joseph H. Hibbard, former state senator, in behalf of the village people, presented Private Fred M. Stuart with a beautiful gold watch, chain and charm, and also a purse of money.  Private Stuart is the only Graniteville boy now in the army.  He was with the 5th Division and lost part of his right leg on the Argonne front last October.  He is now stationed at the Walter Reed hospital in Washington, D.C.

“Miss Eva M. Lord spent the weekend with her sister, Helen Lord, who is stationed at the naval hospital in Newport.

“Miss Beatrice Hosmer has entered the Lowell Normal school for another year of study after teaching the past year.

“Miss Margaret O’Hara has returned from overseas.  She was with the Red Cross nurses in the army of occupation in Germany.”