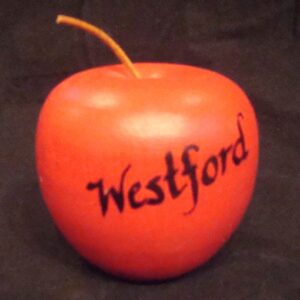 “Center. Miss Thorndike, of Boston, is substituting at Westford academy and in charge of the
branches taught by Principal Roudenbush, the latter still being detained on state guard duty in
Boston. Miss Thorndike is staying while in town with Mrs. Roudenbush.
“Apple picking is in full swing and if more help were available it could be readily used.
Apples are large and of good quality as a rule. O. R. Spalding and H. G. Osgood are having large
yields from their orchards. Robert Prescott and William E. Wright, in addition to the apples they
already have to care for, and in spite of being on state guard duty in Boston, have bought the
apples in the Tarbell orchard on Boston road….
“State Guard. Our local company H of state guard are on their sixth week of duty in Boston,
much to the sacrifice of their own affairs and to most it is getting pretty wearisome, however
willing at first they might have been to tide over an emergency…. Collector of taxes, L. W.
Wheeler, through the deputy state tax commissioner at the state house taking up the matter with
the adjutant general, has been granted a furlough of one month, which will cover the busy period
of taxes.
“Beginning this last week ten furloughs of thirty-six hours were granted each day, taking the
men of the company alphabetically. This is being more generous in the matter of furloughs than
has been the case previously. Last Sunday evening the men were given a special treat at one of
the theatres when a special performance of ‘A prince there was’ [by George M. Cohan] was given
for their benefit.
“Tadmuck Club. The opening meeting of the season of the Tadmuck club took place
Tuesday afternoon at the Unitarian vestry with a good attendance of the membership. The club
starts its fourteenth season with 105 members and three new names proposed for membership.
The president, Mrs. William C. Roudenbush, in her opening address, bade all a gracious welcome
and reviewed briefly the work of the last year. The war relief work accomplished, the change in
dues and the adopting of the care of a little French boy were the special points touched on…..
“American Legion Post Formed. The new organization of Westford service men have
organized as the Westford post of the American Legion. At their meeting last week Thursday
evening the following officers were elected; Ralph A. Fletcher, com.; Edward T. Hanley, vice
com.; Fred Healey, fin. of.; Frank Johnson, sec.; Harold W. Hildreth, war sick of.; Carl Wright,
hist.; Dr. Harry Colburn, J. B. Murphy, H. B. Gray, ex. com., this committee also including the
commander, vice commander, secretary and finance officer; Joseph Thompson, Frank Johnson,
Frank Charlton, entertainment com.; Jack Spinner, William Courchaine, Edward M. Abbot,
George Perkins, Leon F. Hildreth, athletics; George Hanson, Leo Connell, John Spinner,
dance…. An entertainment was given consisting of songs by Mrs. Nettie E. Roberts, Miss Eva

Thompson and Frank Charlton; violin solos, William Mahoney, Dorchester; piano selections,
Luke Walton, M. I. T., of Cambridge, and readings by Miss Mary G. Balch.
“Practically every Westford man is now a member of the American Legion….
“About Town. George C. Spaulding, while picking apples last week Wednesday for
Houghton G. Osgood, Francis hill, fell twenty feet. He was removed to the home of Fred L.
Fletcher in Chelmsford and later removed to St. John’s hospital, Lowell. The fall rendered him
unconscious for some time. Latest reports were that he has come back to his former
conscientious consciousness.
“That there is a big crop of apples there is no doubt; also, that there is a fair sized crop of
champion apple-pickers, each claiming to be champion. We quote: ‘In the Westford items of
Saturday William Pollock claims that a young man working for him picked 21 ½ bushels in an
hour, which beats the champion George Burke, who picked 100 bushels in a day, and now comes
forward Leroy Dutton, of Chelmsford, who has a young man, Elmer Kempton, who picked 103
heaping bushels in nine hours, and he claims the championship.’ Not so fast my little fellows.
Conditions must be as near equal as possible before anyone can lay claim to the championship.
“Forge Village. Work is progressing rapidly on Abbot’s hall, which is being enlarged and
generally improved by the Abbot Worsted Co.
“The soccer football team played a fine game in Methuen last Saturday and defeated the
Methuen team. They will play in Lawrence Saturday.
“Graniteville. The mills and shops were closed on Monday for the holiday.
“Many local men of the state guard visited their homes here recently. The men are getting
mighty tired of their job in Boston.”