“Center.  George F. White has been in attendance at the auto show in Boston all this week, and Mrs. White has spent a part of the week in Boston and Everett, the guest of her sister Mrs. Atwood.

“A very pleasant social for the young people was held at the Congregational church on last Saturday evening with a good attendance and a merry time with music, games and refreshments.  Miss Lillian Sutherland presided at the piano. Refreshments of cookies and cocoa were served….

“Perley E. Wright shipped to Boston by freight last week 1600 bushels of apples, and this week 1460.  These would usually go by auto truck. Mr. Wright hopes by the first of the week to get a truck started over the road.  The bulk of the apples in town have been shipped, but there are still quite a few hundred bushels to be disposed of. Prices are reported holding good.

“Schools closed this week Friday for the spring vacation of one week, and will reopen on Monday, March 29.

“Bird students have reported seeing rose-breasted grosbeaks.  These feathered friends are not usually scheduled until the first of May, so perhaps it is a sign of an early spring when it once gets started.

“Several spring movings are reported.  The John Perkins family plan to move from the house next to the fire house [now the Westford Museum], where they have lived for a number of years [4 Boston Road], to the cottage on [3] Depot street owned by Alec Fisher.  The Harry Ingalls family are expecting to move into the Day house [16 Main St.] when the Parker family move out. Report also has it that Mr. and Mrs. Dunn are to vacate the Bright cottage on Depot street.

“Fred H. Meyers, who has so faithfully and efficiently taken care of the R.F.D. route for the past five years, has resigned, the resignation to take effect the first of April.  Mr. Meyers has accepted a position in the office of C. G. Sargent’s Sons, Graniteville.

“Miss Mattie Crocker has been suffering from a bad burn on her right hand this week, but has managed to teach every day at the Frost school as usual.

“Company H, M.S.G., will hold a drill, supper and entertainment at the town hall on Saturday, commencing at four o’clock.

“The great bulk of snow has pretty much disappeared this week, and the sleighing that has lasted for so many weeks is gone.  Vehicles on wheels began to appear on Tuesday and Wednesday, and also automobiles. Some water in cellars is reported, but the thaw has been fairly gradual or more trouble in that direction would have been the case.

“Forge Village.  On Saturday evening Abbot Worsted band furnished a pleasing concert before the usual entertainment in Abbot hall.  Each number was well rendered and showed the excellent training they have received under the leadership of James Larkin of North Chelmsford.

“On Thursday night a representative from the Harding Uniform Co. of Boston came to make the final arrangements for the uniforms which are on order for the Abbot Worsted band.

“Graniteville.  The usual Lenten devotions were held in St. Catherine’s church here this week.  On Tuesday evening the services were conducted by Rev. J. Emile Dupont, and consisted of a sermon in French, followed by the recital of the rosary and benediction.

“The usual storm visited here last Saturday, but this time it was rain for a change.  Cold weather quickly followed on Sunday and the freeze caused very slippery walking.

“Many from here attended the automobile show in Boston this week.

“About Town.  Mrs. Emma Day is at her old home at the junction of the Graniteville and Cold Spring roads.  She is recovering very slowly from illness. She is fortunate in having Miss Moran for nurse, being exceptionally efficient in care of the sick.

“By the thaw conditions of the weather the school automobile jitneys got back to the transportation of scholars again, Wednesday, after several weeks of sled transportation.

“Daniel H. Sheehan, who got caught with his auto truck in the snowdrifts on the Stony Brook road, and has been storing it for several weeks in the barnyard of W. R. Taylor, which leaks, has uncoupled the rear trucks and is making preparations looking towards remodeling it enough to remove it to his house on the Stony Brook road, where much delayed business is waiting.” 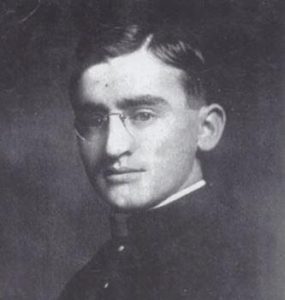 By 1920 350 French Canadians had immigrated to Westford to work in the mills. Many of them spoke no English. Rev. Joseph Emile Dupont (1889-1967) was born in Salem, ordained in 1915, came to St. Catherine’s in Sept. 1918, and often conducted services in French. (Courtesy Photo/Westford Museum)