“About Town.  There was a special meeting of the Grange on Thursday evening to catch up with the business long delayed by omitted meetings on account of storms that were not omitted, and when the weather did omit, impossible traveling filled the vacancy.

“Sunday was observed generally as a day of road-breaking in town as the result of the Saturday blizzard, which had such an easy, smooth sweep on the ice crust and unloaded in the roads.  Everything was at a standstill except the snow, which continued to fill in all places of attractions not previously provided for.  Owing to these obstructive methods of the weather most of the milk delivered in Lowell daily was delivered Monday afternoon….

“Center.  While we do not have moving pictures for entertainment as the other villages do, there promises to be some good amateur dramatics staged a little later in the spring.  The academy students, under the direction of Mrs. H. W. Hildreth, will present the entertaining two-act comedy, ‘Mr. Bob,’ and the local post of the American Legion, under the direction of H. W. Hildreth, are planning a patriotic play to be given one night at Westford town hall and one night at Abbot’s hall, Forge Village.

“Frank Chandler and his horse and sleigh have been much in demand in helping out the transportation problem since autos were out of the question.

“We have noted a number with cameras taking views of snow-piled places about their buildings and snow cuts through the drifts on the roads.

“There are not so many cases of sickness, especially of the acute variety, in the village at present, as for some weeks past.

“Storm Raises Havoc.  The blizzard of last Saturday and Sunday, with its intense, cold, high winds and drifts re-blockading the previous blockade, has been the absorbing subject of the week.  It was certainly a hard proposition for anyone obliged to be out in it.  There was no school on Monday, but sessions resumed on Tuesday.  The J.V. Fletcher library was not open on Saturday or for the usual hour on Sunday, something that has not happened for a long time.  On Sunday there was a very small number out to church and the communion service scheduled for that day was omitted.  There was no evening service.  Shoveling out the roads and gutters had to be done all over again, and some of the roads are still impassable.  The road to Westford depot has had much hard work done on it through the great drifts for the somewhat limited train service which has been the only means of transportation.  One auto was seen out on Wednesday and became stranded in the drifts.  The hopeful phase of the situation is the lateness of the season and that the great bulk of snow will have to succumb to old Sol before a great while.

“Graniteville.  Workmen from the Abbot Worsted Company, C. G. Sargent’s shop and the Graniteville Foundry Company have put in some good work this week digging out the car tracks on the Lowell and Fitchburg road.  The road has been well opened throughout the village and equally good results have been accomplished by the Abbot Worsted Company men in Forge Village.  This is certainly a worthy object and these firms should be commended for the excellent service rendered in ‘first-aid’ work for the trolley lines.

“The bad condition of the roads has made traveling very difficult, particularly for the physicians.  In some cases even the horses were not able to wallow through the drifts and the doctors were obliged to walk.  They have stuck faithfully to the task, however, and in spite of the great amount of sickness in town they have managed to come through and attend to their patients.

“Last Saturday’s blizzard was the worst storm of the season….

“Forge Village.  Work has progressed so well on the Lowell and Fitchburg street railway line that it is expected the cars will be running again this Saturday….  The railway company have kept the tracks open and cars running in face of all the storms until the last blizzard, which completely covered the tracks with ice.

“News Items.  Saturday, March 6, was one of the wildest, bitterest days this season.  Sunday morning proved one of the coldest of the year, and with fresh banks of snow impeding the progress of the traveler, the inclination for church-going was not pronounced.  However, there were services, and a few worshippers were in attendance at all the churches excepting the Unitarian.” 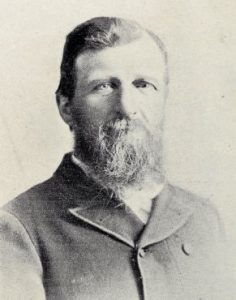 *Samuel Law Taylor (1845-1932), photo c. 1896, lived at 70 Lowell Road where he farmed. He was active in local town politics and in farming, church and social affairs. He served as our state representative (1913) and was the “About Town” correspondent for the Westford Wardsman newspaper, providing his own brand of local humor. Courtesy Photo/Westford Museum.