“Center. Wayland F. Balch and William J. Rafter, of this village, have recently passed their 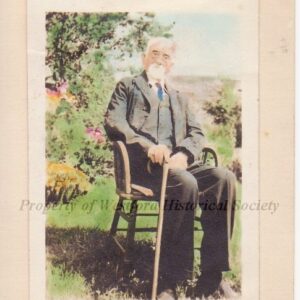 eightieth birthday anniversaries. Mr. Balch has not been well, but was able to take part with the other veterans in the Memorial day exercises, while Mr. Rafter has been busy with his duties on the board of assessors.
“Houghton G. Osgood has purchased a new Ford automobile of the sedan type.
“Members of the state guard held their weekly drill on Tuesday evening, assembling at the town hall and marching to Whitney playground for out-door drill. Plans are being made for anouting and drill this Saturday afternoon at Lake Nabnassett. Owing to changes in the state guard the local company will now belong to Company H instead of Company L, although to what
battalion has not been assigned. One of the company’s duties on Tuesday evening was the
suspending over Main street [of] the victory fifth liberty loan flag opposite the town hall.
“The committee chosen to select a proper memorial for the soldiers and sailors of the town
who have participated in the late war have held their first meeting and organized with Edward M.
Abbot, chairman, and Mrs. Lucy A. Cameron, secretary. The committee requests any person in
the town who has any plan to send the same to the secretary of the committee. Later, an open
meeting will be held when the committee will be glad to receive suggestions.
“The extreme heat this week has been hard for man and beast, especially for those who had to
be out in the sun. The streets have not had their coating of oil yet and the dust nuisance has added
to the discomfort.
“The graduation exercise of the academy will be held in the town hall on Wednesday morning,
June 18, at ten o’clock. A reception to the graduating class will follow immediately after the
graduating exercise, when luncheon will be served. Guests will be welcome at the reception
provided tickets are ordered of Charles L. Hildreth on or before June 10. No tickets can be
promised after this date….
“Memorial Day. The perfect weather conditions and special significance of this Memorial
day made the exercises of a high order and especially worthy of the day. The exercises began
when the line of parade started at the Cavalry building on Boston road [20 Boston Rd.] at ten
o’clock with Capt. Sherman H. Fletcher, marshal of the day, in command, the Nashua Military
band, Company L, M. S. G., with Capt. Charles W. Robinson commanding, Westford veterans of
the civil war, Wesley O. Hawkes, commander, veterans of the world war and Sons and Daughters
of Veterans….
“The band concert on the common in the afternoon was much enjoyed and drew a large crowd
of people….

“About Town. The Grange dance last week Friday evening was all that was expected and
some more. Sixty-five couples enjoyed the dancing. Joseph Wall had charge, with Mrs. Eben
Prescott as an assistant. Hibbard’s orchestra, of Lowell, were at their best as they always are, and
the old-time dancing music brought out the old-time cheer.
“George C. Moore planted forty bushels of Green Mountain potatoes last Saturday. Amos
Polley … did the planting with the Aspinwall planter.
“Forge Village. Mr. and Mrs. William C. Roudenbush, Mrs. O. V. Wells and three children
and Mr. Rafter, of Westford, spent Sunday at Forge pond.
“Corp. Herbert Smith has returned from France and is now visiting with his parents and many
friends. His brother, Charles Smith, was killed in action last summer.
“Graniteville. Both masses in St. Catherine’s church last Sunday morning were celebrated by
Rev. Louis Bachaud, O.M.I., who conducted a very successful mission for the French-speaking
people here last week, and which came to a close with a very impressive ceremony on Sunday
afternoon….
“The recent hot spell came as a great surprise to the people here and bathing parties at the
nearby ponds were very much in evidence.
“Baseball. The Abbot Worsted Company team opened the season here on last Saturday
afternoon with a 5 to 4 victory before a large crowd, when they had the strong Lamson Company
team of Lowell for opponents. Falls and Liston were the battery for the A.W.C. and did good
work….
“Ayer
“Camp Notes. The thermometer registered 102° in the shade Tuesday, the hottest it has been
this summer. In places exposed to the sun the glass read 112°. Despite the heat soldiers
performed their regular duties and the recruits were drilling on the parade field.
“Wednesday saw the hottest weather on record at the camp with the thermometer at 108° in
the shade in the afternoon….”