“Center. It was pleasant to have John A. Taylor, recently returned from service in France, in
attendance at church on Sunday morning and exchanging mutual greetings with old friends after
the service.
“Mrs. Charles H. Bicknell is a busy woman with her houseful of boarders. One day recently
there were twenty to provide meals for.
“Mrs. James B. Hartford, who has been so seriously ill with pneumonia at the home of her
parents, Mr. and Mrs. Charles H. Robinson, is now improving and able to sit up a little each day.
The trained nurse is still in attendance.
“Little Elizabeth Bosworth [aged 23 months] met with an accident one day last week. While
sitting in her high chair she fell, hitting against the stove and making a deep cut in her chin. Miss
Weir, the public health nurse, rendered first aid and later the doctor took some stitches and
bandaged the little lady’s wound, which, while a deep cut, is now healing nicely.
“John P. Wright has exchanged his Studebaker car for a new Chandler touring car.
“Oscar Anderson is out with a new Ford car.
“The conveyance problem remains about the same for Westford center people each one
providing their own conveyance by auto or team, although Mr. Balch while carrying the mails
also carries quite a few passengers. The ‘ankle express’ or just plain walking has been quite
popular, although not so pleasant some of the very warm days.
“Mrs. Maria Day, at the home of her daughter, Mrs. S. B. Watson, met with an accident last
week. She slipped and fell fracturing a rib and straining her right foot. Her physician did
everything to make her comfortable after the accident and she is now much better and in spite of
her eighty-six years and with characteristic energy and cheerfulness makes as little of her injuries
as possible.
“While the final papers have not been passed an interesting real estate transfer is the sale of
Ernest C. Emerson of his farm to Allister MacDougall. This 100 acre farm on [Littleton Rd. near
Providence Rd.] has a thoroughly improved barn and the house has been completely renovated of
late years and has all modern improvements. The land also is under good cultivation. 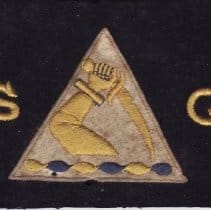 “Annual Encampment. The Westford company of state guard, which is a part of the second battalion of the 11 th regiment, left last Saturday for their annual encampment at East Boxford, Camp Robert Bacon, for a seven days’ tour of duty….“When the men had assembled and before the start the buglers of the company played and the men lined up and sang one or two selections much to the enjoyment of Capt. Robinson’s daughter, Mrs. Hartford, and which could readily be heard from her sick room nearby….

“Forge Village. Miss Eva Mae Lord has accepted the position as public health nurse for the
town of Westford in place of Miss Agnes Weir, who resigned. Miss Lord is a graduate nurse of
the Framingham hospital. She was district nurse in East Jaffrey and Westboro and also spent the
past year with the A.E.F. in France. Miss Lord was offered an excellent position as district nurse
in New York city, but refused it to be at home with her parents.
“Graniteville. The mill and the shop teams played their fifth and deciding game of the series
of twilight games here on last week Friday, the shop boys nosing out a victory in the last of the
eleventh inning, after two were out, winning the game by a score of 8 to 7….
“The berry season is now in full swing and many are returning from the fields with well filled
baskets.
“Baseball. The Abbot Worsted Company team visited Townsend last Saturday and defeated
the crack Townsend A.A. team by the score of 10 to 2. Mulno, the A.W.C. twirler, was in rare
form, only six scattering hits being made off his delivery…. The A.W.C. fielders played a
snappy game and showed excellent team work. Their fast work on the bases put Townsend ‘in
the air’ in the fifth inning when four runs were pushed across the pan….
“About Town. The Read-Drew farm [164 Main St.] has a large acreage of currants which are
being harvested by children from Graniteville and other places. They are transported by auto.
“Graham Whidden is transporting by auto truck to Lowell the lumber sawed from his lot last
winter. He is able to make three trips daily, carrying 1000 feet at a haul.
“Guy R. Decatur turned his old white horse to pasture Monday evening and the horse has not
been seen since. Circumstances make it look like a case of theft.”

Archives from “The Westford Wardsman”