“Center. Miss Harriet Hodgman is in town staying with Miss Emily F. Fletcher.
“The Abbot Worsted Co. band are to give their first concert at the Center Sunday afternoon on
the common from two to four.
“Wednesday the streets in the village received their coating of oil and finished with a good
sanding. This is later than usual but there has been no real drouth this season and the oiling will
be all the more appreciated for the remainder of the summer. Street Supt. McDonald is in charge
of the work.
“The crimson rambler roses at Whitney playground at each end of the tennis court are at their
best this week and present a beautiful sight.
“The new motor fire apparatus has arrived this week and has been tested out by the engineers
and members of the fire company.
“About Town. John Adams Taylor arrived at the Old Oaken Bucket farm Tuesday from the
University of North Dakota for the usual summer vacation. He reports the prospective wheat
crop in North Dakota, the largest wheat growing state in the country, as one of the largest in its
history.
“All the railroad buildings at Westford station are being attractively painted and generally
renovated.
“A fire started last week Friday in the sprout land of Graham R. Whidden, near Westford
station. Harry A. Nesmith, the fire warden, who was cutting brush on the Stony Brook road,
quickly responded and with others prevented its spreading over only about an acre.
“The weekly dances at Marshall’s hall, Westford Corner, are now held Tuesday evenings
instead of Saturday evenings.
“Deer are reported quite plentiful around Lake Nabnassett, including several antelopes. This
adds a desirable variety to the large number of summer campers.
“William Clement, jr., has leased the old Trueworthy Keyes farm on Francis hill of Mrs.
Elizabeth (Courtney) Grasman, who has moved into one of the cottages of the Abbot Worsted Co.
at Brookside.
“Almon J. Downing has part of the lumber drawn for his new house on Main street to take the
place of the one burned several months ago.
“‘Fruitlands,’ Harvard, is now open to the public Tuesday, Thursday and Saturday afternoons
of each week.
“Forge Village. The following is a series of concerts to be given by the Abbot Worsted
Company band: The third Sunday in July, (the 19 th ) and August 15, also Sunday concerts will be
given in Westford center from two to four pm. A large crowd is expected at the Center at the first

concert. The concerts for Forge Village will be given July 21, and August 18, and in Graniteville
August 4 and 25, starting at 6:30 and ending at 8:30 p.m.
“A fine program was given at the movies in Abbot’s hall Saturday night. Besides the feature,
which was Mary Pickford’s latest production, ‘Suds,’ there were several other interesting
pictures. An extra number of seats were added to accommodate the large crowd which taxed the
seating capacity of the new hall.
“Graniteville. On last Saturday the Abbot Worsted Co. baseball club suffered its first defeat
of the season in a batting bee with the strong Parkhill team of Fitchburg by the score of 13 to 10.
Batteries, Davidson and Nee for Parkhill; Malone, Bridgeford and Connell for the A.W.C. Next
Saturday the fast Wakefield team will visit here and a good game is expected. Game called at
three p.m.
“During the warm days this week the bathing beach at Long-sought-for pond has been the
scene of large crowds both afternoon and evening.
“The camping season is now in full swing and all the cottages at the different ponds in this
vicinity are fully occupied.
“The Y.M.C.A. campers from Lake Nabnassett defeated the Hustlers here in a twilight game
last Tuesday by the score of 11 to 6. The campers will play the G.A.C. team here soon.
“The principal streets of the village are now being oiled under the direction of superintendent
of streets, Alexander McDonald. This work has been delayed somewhat this year, but it is all the
more appreciated at this time, for a good job is being done.
“Ayer
“District Court. Three automobile drivers were fined on Thursday morning for violation of
the automobile laws in Westford. They were: Clifton J. Ewing of Littleton, for not blowing horn,
fined ten dollars; Herman Turcotte of Dracut for the same offence, ten dollars; Alphonse Lessard
of Lowell, same offense, five dollars, and for driving without a license, ten dollars….” [Motor
vehicle laws at this time required drivers to blow the horn before driving through an intersection.] 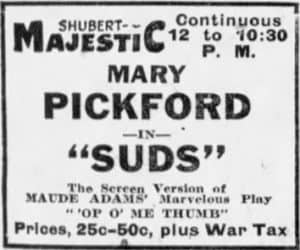