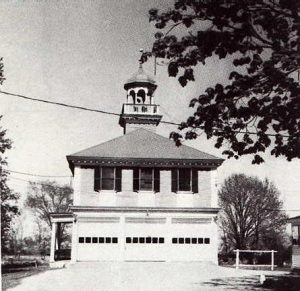 In 1909, the Board of Fire Engineers presented their first annual report indicating that there were three distinct fire companies in Westford consisting of twenty men each.

In 1909 it was voted that each member of the Fire Department, including the Call Men. were to receive a salary of $1 per year. By 1922 the company name of Choate. Edwards and Abbot were dropped from the Town Report and the fire companies, were referred to by their company number only. The 1924 Fire Engineer’s report stated that the horse-drawn hose wagon in Graniteville and Forge Village were practically useless, as there were no horses to haul them.

The Westford Fire Department is growing and changing. Geoff Hall visits the WFD to talk with Chief Joseph Targ about the history and future of fire services in Westford.

At the Annual Town Meeting in March, the new fire station being built on Boston Road, was approved unanimously by voters to be named Fletcher Fire Station One. Geoff Hall goes around town to answer why “Fletcher Station One” by delving into the Westford Fire Department’s history and the Fletcher family’s long time connection to it (Westford CAT)

To all the men and women who now serve in the Westford Fire Department, we thank you