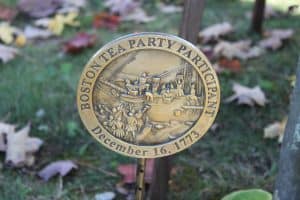 On Saturday October 15, 2022, at Fairview Cemetery, the Westford Historical Society and  the Westford Cemetery Commission in partnership with the Boston Tea Party Ship and Museum recognized Capt. Read’s participation in the destruction of the tea, Boston Harbor, December 16, 1773.

It’s an honor to be here today with all of you in this beautiful cemetery to  commemorate Joseph Read’s involvement in the Boston Tea Party.

We are working in partnership with Revolution 250 to commemorate the  250th anniversary of the BTP in 2023 with a year-long series of events,  commemorations, performances, exhibits, reenactments, and educational  initiatives. This commemorative year will culminate in the grand scale  reenactment of the Boston Tea Party on December 16, 2023. Of course,  ceremonies such as this one are part of these commemorative efforts– honoring those who risked everything to take part in an act of protest that  would ultimately define a nation.

The Boston Tea Party took place on December 16, 1773 and it is an event  that is remembered and reenacted not just here in New England, but  around the world. John Adams would call it the most magnificent  movement of all. Even Royal Governor Thomas Hutchinson would call it  the boldest stroke yet struck in America.

Its principles and values speak through the generations and ideas of  protesting against injustice and tyranny, are things that we can understand  and relate to even 250 years later.

While no official count exists, it is believed that between 100-150 men were  involved in the destruction of the tea on December 16, 1773.

There has always been an air of mystery and secrecy surrounding who was  involved. After all, in the eyes of the British authority it was a treasonous  act. In the years afterwards, the event was not celebrated, certainly not in  the way we do today—in fact the term “Boston Tea Party” was not  published until 1826. Many of the participants swore an oath of secrecy to

never reveal the names of those involved. While some held true to their  oaths, even until their death, some did not. I think the fact that we are all  here today is evidence enough of that!

Read would have been 57 years old on December 16, 1773. He was one of  only a handful of participants who were in the more advanced years of his  life as many of the participants were young adults and apprentices.

Read was born in June of 1716–son of Thomas Read and Sarah Fletcher  Read.

In 1737 he married Ruth Underwood in Concord, MA. Together they had 8  children: Joshua, Ruth, Benjamin, Joseph, Leonard, Molly, Sampson, and  Molly.

While we do not know his occupation, his family history suggests  involvement in the destruction of the tea and service during the  Revolutionary War.

The revolutionary spirit of Joseph Read can be found throughout Westford  and in communities across Massachusetts as the actions of the tea party  participants reverberate as strongly today as they did in 1773.

The majority of their names are hardly, if ever, mentioned with those we  routinely honor during times of historical commemoration. But, these men,  and others like them, are just as important to our region’s history as Paul  Revere, Samuel Adams, John Adams, and John Hancock. Many were  common tradesmen and a large portion of those were young adults and  apprentices.

These ordinary citizens did extraordinary things and are worthy of  our recognition.

It is our ultimate goal that a commemorative marker be placed at the grave  of every known Boston Tea Party participant by the 250th anniversary in  December of 2023. These participants are buried as far north as the  border of Maine and Canada, as far south as Alexandria, VA, and as far  west as Cincinnati, OH. Our hope is that these markers will encourage  visitors to remember and reflect upon the deeds of the common yet  critically important citizens that are responsible for the formative years of  our region and our nation. 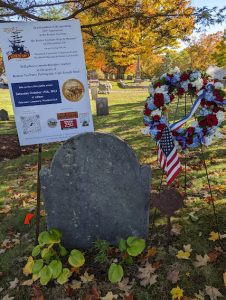 Susan Hosley O’Conlon. 6th great Granddaughter of Capt. Read, sent a lovely wreath of flowers for the dedication and this message “ He deserves to be remembered. Without him and his comrades, none of us would be free. Let us do all we can to ensure our republic stands!”