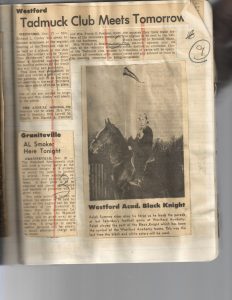 Prior to the Grey Ghost mascot, Westford Academy had the Black Knight. This early mascot existed very briefly between 1956 and 1958, with the school team colors being black and white in those years (WA teams also known as the “Black and Whites”). The 1959 yearbook specifically stated that WA teams would no longer use the symbol after the 1958 season.

The above image was taken from the November 1958 issue of the Lowell Sun, and is currently the only known picture of the Black Knight. It features a young boy, Ralph Symmes, Jr. (1944-2013), dressed as the short-lived mascot at its last football game. According to the sports archives at the Chelmsford Historical Commission, his father, Ralph, Sr. (1908-1980), owned and trained horses in the 1950s, as well as being the then president of the Silver Spurs Horse Club.

The familiar Grey Ghost — and associated maroon and gray colors — were adopted and applied starting in 1959, after the picture was taken. This change was related to new, differently colored uniforms. Research at WHS suggested the ghost was inspired by the title of a popular TV series at the time, “The Gray Ghost.” The mascot was sometimes spelled “Gray Ghost” in the first years, and was first featured on the 1963 yearbook cover, merged with the clarion trumpeter featured on the covers prior. Not counting aesthetic changes, the Grey Ghost since became synonymous with WA.