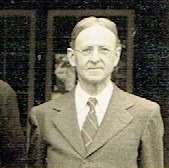 The annual reunion and banquet of the Westford Academy Alumni Association which was held in the assembly hall on Saturday evening with 242 people in attendance was the largest and most successful gathering to date.  A large number made a special effort to attend because of the farewell to Principal William C. Roundenbush [sic], who has retired after 25 years as principal of Westford academy.  Pictures of the graduating classes, programs and other items of interest were on exhibition in the classrooms where the guests gathered before the banquet.
A meal was served at 7 o’clock in the assembly hall, with daisies and yellow candles attractively decorating the tables.  Community singing opened the program with Mrs. Daisy Precious Perry as pianist and leader, Alexander Belida, piano accordion, Richard Hall and Paul LePage, banjoes.  William R. Taylor, president of the Alumni Association, was in charge of the program and introduced the toastmaster, Gordon B. Seavey.  The report of the secretary and treasurer, Mrs. Elva Judd Rollins, was read and accepted.  The nominating committee as appointed by Mr. Taylor were Miss Mary G. Balch, Miss Bernice Gould and Gordon B. Seavey.
The officers elected were: President, John Fisher; vice president, George A. Drew; secretary and treasurer, Mrs. Elva Judd Rollins; executive committee for three years, Charles L. and Richard L. Hildreth.
Mr. Seavey, who has recently been made a trustee of Westford Academy, introduced Dr. Warren Stearns of Billerica, a member of the board, who spoke for the trustees.  Miss Lillian B. Atwood, 1877, spoke briefly for her class and was followed by Miss Clara Fisher, 1882, John Fisher, 1887, Albert Hall, 1937, Reginald T. Steeves , and Alfred Gay, former teachers, class song, 1937, Dennis Baretto, 1932, John Hall, 1897, Robert W. Barclay, superintendent of schools, Miss Lucinda Prescott, 1907, Mrs. Edna MacLeod, 1927, John Kimball, 1922, and Mrs. Elva Judd Rollins, 1917.
Principal Given Radio.
As a token of gratitude and affection to the beloved principal of Westford academy, a radio was presented to Mr. Roudenbush from the trustees, by the Hon. Herbert E. Fletcher, a sum of money and field glasses from former students, teachers and friends, and a radio table from the Alumni Association.  Mrs. Roudenbush was given a lovely bag and a bouquet of flowers, the presentation being made by Mrs. Daisy P. Perry.
Mr. Roudenbush spoke of his 25 years at Westford Academy; during this time, 380 young people had been graduated under him.  Forty-one women teachers and 14 men have served under Mr. Roudenbush and the attendance of the school increased from 55 to its present numbers.  He also asked for support for the Alumni Loan Fund which now amounts to $343.52.  A motion was made and enthusiastically accepted to make Mr. Roudenbush honorary president of the Westford Academy Alumni Association.
A suggestion was made that letters be sent to Baaliss Blaisdell, 1897, who is at the Veterans hospital in Togus, Me.  Greetings from Wm. F. Davis, Mrs. Persis Sunbury Hersome, Arthur G. Robbins, Julia E. Hall, Agnes O’Brien, Persis Ormsby, H. L. Blaisdell, Miss Emma J. Stevens, Joseph Ackermann, Miss Adelaide M. Baker, Katherine Ott, Mary J. Connors, Mabel I. Osborne, Bertha Lang Geiseler, Marion Moreland, Ruth M. Smith, Gertrude Bartlett Wilson, Daisy B. Hilton, Mary G. Hickey, Lawrence W. Holbrook and Fred Amesbury.