“Center. New telephone subscribers added to the already large exchange are Clarence
Hildreth 53; J. E. Clement, 107-3; Arthur Hildreth, 107-4, and Edward Perkins, 36-1.
“Edward Griffin, living at the south part of the town and an attendant at the Parkerville school,
had a bicycle stolen from the schoolhouse during the school session Monday. Two men were
seen riding off. The bicycle was a good, new machine and a real loss. In spite of efforts put forth
no trace of it has been found yet.
“Quite varying reports of frost last Sunday night come in. In many places in the low lands
there were heavy frosts and in other places not as hard hit. Not much trouble on Westford hill
was reported.
“The Parkerville school is looking its best with a new coat of paint.
“Alex. McDougall, recently receiving a newspaper from his home town in Cairndow,
Scotland, noted a cattle show taking place in Westford, Scotland, about fifty miles from
Cairndow.
“The Ayrshire stock from Duncraggan farm, George F. White, proprietor, that is now on
exhibition on the show circuit, have been winning many honors, thus far having been shown at
Worcester, Waltham and Greenfield. There are ten head in the show herd and in these three
shows have won twenty-four ribbons of which ten are blue. At each place where shown they
have been in competition with the best stock in this part of New England. This week they are
shown at Springfield at the Eastern States exposition, where there will be gathered the best
showing of Ayrshires to be found in the country this year. Mr. White feels that if he is fortunate
enough to bring home some ribbons from Springfield he can justly be proud to do so. Next week
the herd goes to Vermont State fair at White River Junction, then to Brockton fair and then home
about October 10.
“Wright &amp; Fletcher had an attractive sale of ferns and rubber plants from the Highland
conservatories Wednesday and Thursday.
“About Town. The Abbot Worsted Co. have the mill pond at Brookside drawn down while
making some repairs.
“The first round of frost was called Sunday night. In the Stony Brook valley it was light and
registered only barely two below freezing.
“Graniteville. Many people from this village attended the soccer football game in Forge
Village last Saturday afternoon when the Abbot Worsted Co. eleven defeated the Lynn Electric
Thistles 1 to 0.
“The Ladies’ Aid of the M. E. Church held an experience party and entertainment in the vestry
of the church on Wednesday evening that was largely attended. The experience part of the

program proved to be highly interesting, after which an excellent entertainment was given that
consisted of music by the Precious orchestra of Forge Village, songs by Mrs. Cyril A. Blaney of
Westford, reading by Miss Doris York, piano solos by Miss Florence Caunter and Miss Hilda
Sugden. A buffet lunch was served. The whole affair was a great success and the members of
the Ladies’ Aid feel deeply grateful to all who helped in the affair.
“Forge Village. Everyone is looking forward to the second annual field day to be given by
the Abbot Worsted Co. in Graniteville on Saturday. A generous supply of tickets has been given
to every family having members in the employ of the Abbot Worsted Co. and their friends. The
prizes to be awarded the winners in the various races are on display at the box office of the
moving picture house. No admittance fee of any kind is charged to this gala day, but a courteous
invitation is extended to all employees with their family and particularly the children.
“Littleton
“Death. Allen Griffin Smith passed away at his home at the Common, Friday evening,
September 17, aged seventy-nine years after a lengthened illness of some seven years. Mr. Smith
was born in Chelmsford and has always lived in that and nearby towns, making his home with his
son and two daughters at Littleton Common. He was a veteran of the Civil war, enlisting with Co.
E, 6th Infantry of Acton in 1861 and served until his discharge in 1863.
“In Littleton he was engaged until recently with his son, Walter E. Smith, in the manufacture
of wooden hoops…. The service on Sunday afternoon was conducted by Rev. H. L. Caulkins,
followed by a very fitting and impressive exercise by the Acton post, G. A. R., of which he had
been a member for thirty years.” [He is buried in Fairview Cemetery, Westford.] 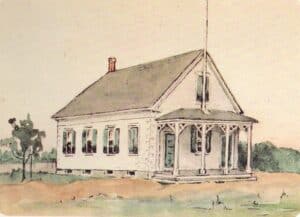