“Center. The Herbert Mills family are all quarantined with scarlet fever, three members of the family being sick with this disease.
“There are thirty-four girls and thirty-three boys enrolled at the academy, making a school of sixty-seven pupils and 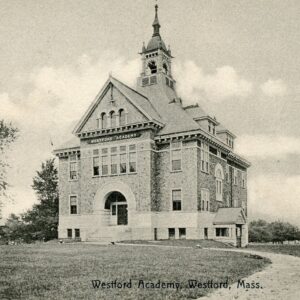 about evenly divided.
“We are told that the automobile number plates for 1920 are to be white with blue embossed figures. These are being made at Charlestown state prison by convict labor.
“The Arthur E. Days are having sickness in their household—Miss Edna Day with tonsillitis and mumps, and the younger girls, Marion and Viola, both have the mumps.
“The millinery class of the Tadmuck club, taught by Miss Frances Tomer of the Middlesex County Farm Bureau, held its first meeting of the four Tuesday afternoons in Library hall. The class of twelve, which has reached the number of fourteen, were much interested in their first lesson….
“George F. White made a trip to Syracuse, N.Y., this week, where the state fair is in progress, and where some of his registered Ayrshire stock are among the exhibits.
“It will be one of the memorable events for a long time when our local contingent of state guard was called out Wednesday afternoon to go to Boston for duty in connection with the big police strike. The members were warned at drill Tuesday evening that this call might come and when on Wednesday afternoon the Unitarian church bell sounded the signal, three sonorous strokes repeated four times, there were lively times getting fifty men together—the men of the community and surroundings that represented the busy, capable workers. Capt. Robinson and his helpers got the members together and the start was made about 5:30 to Lowell and thence to Boston by train….
“The board of assessors find the total tax levy for the year to be $43,772.07, divided as follows: Polls $616, personal estate $12,422.68, real estate $29,861.37, moth tax $873.02; rate $17 on a thousand.
“About Town. The board of registrars are scheduled to hold a meeting in the town hall on Saturday evening of this week from 7:30 to 9 o’clock. Don’t know about all this, at the time of writing the board of registrars were boarding the cars as members of the state guard to do police duty in Boston in place of the striking policemen….
“The farmers on Francis hill were represented at the Farm Bureau visit to the Marshall fruit farm in Fitchburg last week. Houghton G. Osgood and George O. Spalding were among those present. Mr. Osgood is one of the largest apple-growers in town, raising last year 1500 bushels on the ground by the assistance of the wind and the willingness of gravitation. If we have the figures right there were 4000 bushels that were picked before wind and gravitation got around to it. Mr. Osgood, as one of the largest apple-growers, has Mr. Spalding as his largest assistant.
“The Abbot Worsted Company are improving the appearance of their Brookside mill by painting the trimmings of the brick mill.
“Forge Village. Miss Eva M. Lord, nurse, has made the following report for the month of August: During the month three new cases of scarlet fever were reported from one family and two cases were carried over from last month; quarantine was lifted from the last two cases and houses of same fumigated. One room in a house was fumigated where it was necessary to remove patients to secure better isolation. One case of mumps, two cases of chickenpox and two cases of German measles were also reported. Visits made to communicable diseases 45, nursing and instructive visits 24, prenatal visits 6, sanitary visits 4, observation visits 33, visits of a business and social nature 21; total, 133. Four children were taken to hospital to have tonsils and adenoids removed; two children to be vaccinated.
“Field Day. The first annual field day given by the Abbot Worsted Company for their employees was held on the Abbot playground last Saturday afternoon. The U.S. Cartridge Company’s band marched from Union street to the grounds at 1:30, and upon arriving at the grounds played several pleasing selections. The large, well-kept grounds were an ideal place to hold the event and nearly 2000 people from the mills at Brookside, Graniteville, and Forge Village were present….
“Graniteville. The Abbot Worsted Co. … have recently beautified their cottages on upper River street by having them freshly painted with a pleasing color that harmonizes with the surroundings….
“The batters are up for a new garage that will be erected by F. Russell Furbush on Broadway, near the railroad bridge. The building will be of concrete construction and work on it will commence at once.”