“Center.  Dr. and Mrs. Edward Atwood and Miss Evelyn Atwood, of Daytona, Fla., are visiting at the home of the Misses Atwood [4 Graniteville Road].

“While there has been frost in the lowlands on Westford hill, frost has held off well and corn and other garden stuff has not been injured.

“Still Doing Police Duty.  Company H of the 11th Regiment of the state guard, which is the Westford company, about seventy-four in number, remain on active duty in Boston.  They are quartered at the South Armory and are patrolling a district from Summer street to Park square and to Atlantic avenue and westward by South station.  This is perhaps territory that contains property value per square foot as large as any in the city.  Better sleeping arrangements are being made for the men, cots being provided instead of the pallets of straw, and better ventilation is being arranged for….  The hours of duty are from twelve midnight to eight in the morning.  The men, while they get pretty tired, are well and game for what is expected of them, although much to the sacrifice of their own affairs.  The men under forty-five years of age have been inoculated against typhoid fever.

“Agricultural Fair.  Notwithstanding so many families being affected by absences in the state guard, the annual agricultural fair of the Congregational church which has been an annual autumn event for thirty years, was held at the town hall last week Friday afternoon and evening and was very much of a success….

“There were sales tables for aprons, fancy and useful articles and candy.  Supper was served from six to eight and at eight o’clock an enjoyable entertainment was given….

“There were exhibits of fruits and vegetables from A. H. Burnham, the Cold Spring farm, the Drew Fruit farm, James Wilson, George W. Kimball, Perry Shupe, George Shaddick, Mrs. Lucy Keyes, Gordon Seavey, H. G. Osgood, 14 varieties of apples, Miss Lambert and a table of handsome produce from A. A. Hildreth and family.

“About Town.  ‘The earth is the Lord’s and the fullness thereof.’  Interpreting this on a selfish basis the fruit 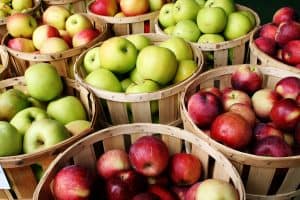 farm of Dr. Varney on the hill overlooking West Chelmsford was relieved of forty bushels of McIntosh apples Tuesday evening.  These intruders picked the apples from the trees, under the protest of Mrs. Lambert, the wife of the superintendent of the farm, he being in Boston as military police.  Mrs. Lambert was threatened with free transportation to the unknown land if there was any attempt to call the police.

“The large crop of apples have made the limbs sag and prices are feeling the sag.  Most all trees over-run the estimate; some trees are just packed with apples when you can pick ten barrels off a tree not yet arrived at more than half size.

“Under Article 2 it was voted to choose a board of health at the next annual meeting.

“Under Article 3 it was voted to appropriate the additional sum of $5000 for roads, largely on account of the Graniteville road which the state is building and the town is paying.

“Article 4. Voted the additional sum of $2000 for schools, largely made necessary by transporting of scholars from Brookside to Westford.

“Article 5. It was voted to appropriate the additional sum of $300 for use of the public nurse….

“Graniteville.  A series of motion pictures showing the value of following the rule of ‘Safety first’ was shown in the Abbot clubhouse here on last Monday night to a large and appreciative audience.  The show was given under the auspices of the Abbot Worsted Co. and will no doubt prove of great value to the employees as time goes on.  A representative from one of the insurance companies also gave a brief talk during the evening.

“Forge Village.  Miss Margaret O’Hara has returned to Camp Lee, Va., after a ten-days’ furlough spent here at the home of her sister, Mrs. Jane Dare, and her many friends. Miss O’Hara spent many months in France with the A.E.F., and in Germany with the army of occupation.

“Principal William C. Roudenbush has now been on guard duty in Boston since the strike, and unless he is discharged from duty an effort will be made to secure a substitute teacher for French and Latin at the academy.  Mrs. Harold W. Hildreth has been acting principal.”