“Center. The Donald M. Camerons have closed the Cameron homestead this week and
moved back to their city home in Lowell.
“Alfred N. Tuttle is now the regularly appointed R.F.D. carrier, he having passed the best
examination of any who applied.
“Among the new women auto drivers who have qualified for their licenses and who are
driving the family car this season are Mrs. J. Herbert Fletcher, Mrs. Robert Prescott, Miss Hazel
Hartford, Mrs. Clarence Hildreth and Mrs. L. W. Wheeler.
“George F. White has been in attendance this week at a convention of Reo automobile agents
and dealers at Lansing, Mich. The last of the week Mrs. White joins her husband at Buffalo and
they plan a vacation trip with interesting itinerary, including New York, Vermont, New
Hampshire and into Maine.
“Mr. and Mrs. Allister MacDougall and three children, two little sons and a daughter, are
spending a vacation in town at the home of Mr. and Mrs. Alec MacDougall.
“Miss Evelyn Atwood is a visitor for this week at the home of the Misses Atwood.
“Miss Maude Robinson, who has been teaching at Thompson’s island, is at home where she
will rest for the present. She is under the doctor’s care with a cold and very sore throat.
“Friday of last week a church cleaning bee took place at the Congregational church and it was
a busy time. Fourteen faithful workers gave of their time and strength and cleaned downstairs,
including the audience room and vestry and Monday a supplementary group of four cleaned the
dining room and kitchen upstairs.
“The recent agricultural church fair proceeds netted $392.00.
“The dance under the auspices of the senior class of Westford academy was a pleasant social
and financial success the evening of the holiday. The Colonial singing orchestra furnished music
for the dancing and refreshments served at intermission.
“Naturalists’ Meeting. Miss Emily F. Fletcher recently attended a two-day session of
naturalists, the first meeting taking place at Lawrence Friday when the Lawrence Natural History
society entertained the N. E. Federation of Natural History societies. A paper on ‘Beetles’ and
one on ‘Bee keeping’ and the third speaker was Miss Fletcher, who gave a short talk illustrated
with a collection of ten pressed specimens of plants found in the wool waste near her home in
Westford. Miss Fletcher has discovered fifty different plants, the seeds of which were
transplanted in the wool waste from different parts of the world. Some of them were curious and
unknown to botanists in this country until recently.
“The second day at Andover was full of interest to those present when exhibits, papers and a
search for mushrooms was enjoyed. Of 53 varieties of this last 50 percent were edible. There

was a fine collection of wild flowers with 575 specimens on exhibition as well as a beautiful
collection of Rocky mountain wildflowers.
“Tadmuck Club. The opening meeting of the fifteenth season of the Tadmuck club took
place Tuesday afternoon at the Congregational church. Mrs. George F. White is the club’s new
president and the fifth of the able women who have served the club in this capacity. …
“The next meeting of the club is an important one and is an open meeting in the Unitarian
church and an address by Mrs. Trueworthy White from the Massachusetts League of Women
Voters. Subject, ‘Citizenship.’ This meeting is in charge of the legislative committee and both
men and women are earnestly invited.
“About Town. Edward Clement has bought the apples on the Fletcher Cold Spring farm.
There will be a number of hundred bushels of apples.
“The addition to the Donnelly store at Brookside is completed. It is not only an improvement
as regards room, but also as regards sunlight.
“The Abbot Worsted Co. are now laying the water mains on the road in rear of the Bussey
barn to supply the large boarding house and other cottages. The steam shovel is still in use.
“Graniteville. The mills of the Abbot Worsted Co. were closed here on Monday and also
over the holiday. During the time the mills were closed much needed repairs were made on the
raceway at the mill dam. The water of the mill pond was drawn off to enable the men to work.
“Matthew Downs of North Westford, who is the oldest citizen in the town, has been spending
the past few days at his boyhood home in Vassalboro, Maine.” 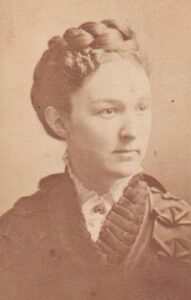 Noted botanist Miss Emily Frances Fletcher (1845-1923) specialized in identifying plants
brought to Westford from all over the world as seeds in wool used by the Abbot Worsted Co. She
left her botanical collection of 630 specimens to the Gray Herbarium at Harvard University.
Courtesy Photo / Westford Historical Society.

Emily Frances Fletcher (1845-1923) Daughter of Sherman Dewey Fletcher and Emily Augusta Fletcher. In 1848, her father built the house that is now 33 Main Street, next door to Ellen & Mike Harde’s current home. Emily grew up in this home along with her siblings Sherman H. & Cornelia.

In 1873 her brother Sherman took over his father’s interest in a small general store (now 40 Main St.) and it became known as the Wright and Fletcher Store. Emily lived on the second floor. She entered Westford Academy at the age of ten and pursued her interest in nature that lasted into her adult years.  She scratched through Australian wool waste at Westford Depot looking for specimens of foreign grasses and became an accomplished taxidermist. Some of her bird collection is stored at the J.V. Fletcher Library. Emily’s large collection of dried specimens from Westford is housed at the Gray Herbarium at Harvard University.

Emily was a Sunday school teacher of boys and a member of the choir in the Unitarian Church. She died on April 13, 1923.  She was first cousin twice removed from J.V. Fletcher.