“Center. The taxpayers of Westford have met their obligations to state, county and town with
prompt payment of taxes this year. The poll tax list, which was issued in the summer, is
practically cleaned up. Of the total levy of $54,462.47 the tax collector reports $51,329.53
collected to date. This leaves a balance to collect of $3,096.94 [$3,132.94?].
“Mr. and Mrs. Charles S. Edwards’ little daughter Rita is sick with scarlet fever.
“A very pleasant Hallowe’en social was held at the Congregational vestry last Saturday
evening under the auspices of the Young People’s league. There was the usual merry Hallowe’en
stunts and a ghost welcomed the guests. There were also some clever fortune telling.
Refreshments of sandwiches, cake and cocoa were served. Miss Elva Judd, Miss Elinor Colburn
and Lawrence Ingalls were the committee in charge.
“The election has been the absorbing event of interest for the week. The town went strongly
Republican.
“One of Westford’s citizens, Alfred W. Hartford, was elected with a flattering vote to serve as
representative from this district. Mrs. H. V. Hildreth and Mrs. A. W. Hartford, representing the
Woman’s League of Republican voters, were in attendance during the day to keep account of the
women registered. Mrs. E. K. Sargent [nee Elizabeth Abbot Kebler, married to Winthrop
William Sargent in 1909, probably divorced in 1920 or shortly thereafter] is reported as the first
woman to cast her vote at the polls. Following is the result of the day’s vote: President, Harding
535, Cox 110; governor, Cox 494, Walsh 143; lieutenant governor, Fuller 406, Coolidge 143,
Washburn 66; treasurer, James Jackson 486, George H. Jackson 20, O’Hearn 113, congress,
Rogers 500, Palmer 156; auditor, Cook 189, Cram 127; senator, Putnam 490, Sparks 149.
“The monthly business meeting and supper of the Edward M. Abbot Hose Co. No. 1 took
place at the fire house [now the Westford Museum] Wednesday evening, with nearly every man
present. An oyster supper, supplemented with cold ham, pies, coffee and rolls, was much enjoyed
and was in charge of A. H. Sutherland, A. W. Tuttle and Peter Clement.
“On Westford hill there have been no damaging frosts until the first of November, which is a
record to remember. Such tender plants as nasturtiums, morning glories, dahlias and tomato
plants, were still intact from frost November 1. Another sign that winter was not quite with us
yet, the tennis devotees had a lively wind up for the season at Whitney playground last Saturday
afternoon.
“William Sutherland who is a voter in Westford, came up from Belmont where he makes his
home with his daughter, Mrs. Jeanett [sic, Jeannette] Sutherland Christie, to spend a few days
with the A. H. Sutherlands [William’s son’s family] and to cast his vote. He has passed his 82 nd
birthday and enjoys very comfortable health.

“About Town. Once in a life time has come around and the National Grange will meet in
Boston next week, commencing Wednesday, November 10, and lasting until November 19. The
seventh degree will be conferred at Mechanics’ hall on Friday, November 12, at 2:30 p.m. and
7:30 in the evening. On Sunday, November 14, the delegates and others are to be taken by
automobile over the route of Paul Revere’s ride through Concord, Lexington and other points,
stopping at Concord and attending church at the old historic First Parish church. Monday,
November 15 will be given over to a trip by special train to Plymouth and a fitting historical
service at Plymouth Rock. The use of Faneuil hall has been secured for the second week
beginning with the memorial service on Sunday night, following the use of Mechanics’ hall the
entire first week.
“The poles and wires of the discontinued electric road from Brookside to Westford have been
sold to the Lowell Electric Light Co. and they have commenced to remove them elsewhere.
“Workmen engaged in repairing one of the furnaces at the First Parish church found the other
one defective also. For want of heating facilities it was necessary to omit the service Sunday.
“Graniteville. In spite of the poor weather on Tuesday a large vote registered here. Although
Alfred W. Hartford was unopposed in the office of representative, he received a very large
complimentary vote. He was high man in the town, getting 585 voters….” 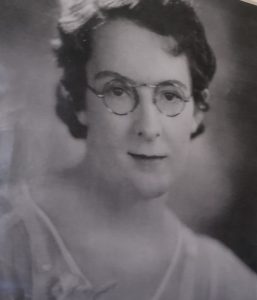 Rita (Edwards) Miller circa 1936, born in 1918, was a noted Westford teacher and principal
from 1939 to 1983. Westford’s Rita Edwards Miller Elementary School is named in her honor.
Courtesy Photo / Westford Historical Society