“Center. We think Westford has been justified during these recent years in feeling a just
pride in her Red Cross work. Now that the annual drive for membership [has] begun, November
11 and lasting until November 25, [it] is the time to sustain this record and ‘carry on.’ Your
membership in the Red Cross is needed now just as much as ever. Think it over and join [for]
humanity’s sake. The subscriptions can be left in Westford Center at the postoffice, Wright &amp;
Fletcher’s store, or with the chairman of the Westford branch, Mrs. Herbert V. Hildreth. In
Graniteville at the railroad station, at Mrs. A. R. Wall’s store or at either mill or shop. In Forge
Village at the postoffice, Miss Hanley’s store or at the mill. Make this a conscientious duty and
join now.
“Members of Co. H, M.S.G., held a meeting at the lower town hall for the distributions of
service buttons Tuesday evening. The buttons distributed were neat bronze affairs with the state
seal in the center and the inscription ‘State Guard of Massachusetts War Service’ around the
outside. Needless to say these service buttons mean much to the recipients.
“A most acceptable piece of road improvement is being done in charge of the State Highway
commission on the Boston road near Minot’s corner [intersection of Boston, Littleton and Carlisle
Roads]. The roadbed is being raised and a heavy foundation of stone put in, which it is hoped
will not cut through in mud time. This is a very bad place in the spring and we are told the other
stretch below the Burbeck farm [now 219 Littleton Road, site of the Regency Inn], which always
gives so much trouble in the spring, is to also be repaired and given the same treatment by the
State Highway commission.
“Many are looking forward to the Thanksgiving eve dinner under the auspices of the Edward
M. Abbot Hose Co. at the town hall next Wednesday evening with Poole &amp; Brigham’s orchestra.
“Roadmaster [Alexander] McDonald and his men have done a thorough job in raking and
carrying off the leaves from the common and the village streets.
“Annual Church Supper. The sixteenth annual supper which introduces the series for the
winter took place at the town hall Wednesday evening. While the weather was not favorable
there was a good attendance present, fully 125 people filling the long tables. A good menu of
cold ham, creamed potatoes, escalloped oysters, rolls, relishes, jellies, celery, coffee and ice
cream, served with apple pie, was served.
“At the close of the supper Mr. Brownsey introduced John P. Wright, toastmaster for the
evening, who presided with his usual wit and good fun. The girls’ chorus consisting of Misses
Marion and Mildred Fletcher, Misses Ruth and Alice Johnson and Miss Elva Judd, gave excellent
numbers, Mrs. Blaney accompanist. The Precious orchestra, Misses Caroline, Mildred and
Pamelia Precious, played during the supper, and also gave numbers for the later program….

“About Town. The Bussy barn at Brookside, for so many years in the color of dark red, has
been painted white by the Abbot Worsted Co., which is a very noticeable improvement to the
barn and the entire village surroundings.
“The Silesia mills at North Chelmsford of the American Woolen [sic, United States Worsted]
Co. [built by George C. Moore 1896-97] have closed down indefinitely and 1000 hands will be
affected.
“Graniteville. The many soccer football fans that went to Forge Village last Saturday
afternoon witnessed a fine game between the Smith and Dove team of Andover and the Abbot
Worsted Co., the latter winning 1 to 0. The Abbot Worsted Co. band was in attendance and a fine
crowd was out for the game.
“J. A. Healy &amp; Sons are now building an addition to their garage on Second street.
“F. Russell Furbush of Furbush’s garage is now driving a new Hudson super-six.
“Ayer
“News Items. One of the biggest soccer football games of the year will be played on Abbot
Worsted Co. athletic field Saturday afternoon at 2:30 o’clock. The Fore River F. C. [Football
Club] of Quincy, eastern champions of 1919, will meet the Abbot Worsted Co. F. C. in the
second round of the national cup tie. The Fore River team was only beaten last season by the St.
Louis F. C. for the championship of the United States. The Abbot Worsted Co. have never been
defeated on their grounds.” 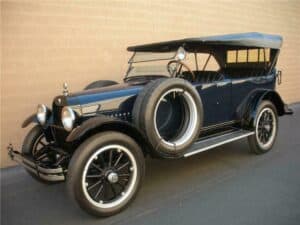 The 1920 Hudson Super 6, purchased by Russell Furbush, was first produced in 1916. It was an early muscle car with a 288.5 cubic-inch (4.7 liter) inline-six that developed 76 horsepower.
Courtesy Photo / Barrett-Jackson Car Auctions www.barrett-jackson.com.