“Center.  Mr. and Mrs. Abiel J. Abbot are in Boston for the winter months.

“Misses Sarah, Lillian and May Atwood started Tuesday for Jacksonville, Fla., for their usual winter sojourn in warmer climatic conditions.

“Miss Connors, of Medfield, is the new commercial teacher at the academy in place of Miss Cohen, who recently resigned.

“The Red Cross drive closed this week with a total of 595 paid memberships.  Those at the Center in charge were Mrs. H. V. Hildreth, Mrs. Charles L. Hildreth, Mrs. A. W. Hartford and Mrs. H. M. Bartlett.

“Mrs. Alice M. Wells, of the Abbot Worsted Co., is attending Friday and Saturday of this week a two-days’ factory nurses’ conference in Hartford, Conn….

“Armistice day, while a legal holiday and which all had a deep appreciation of its significance, was quietly spent in 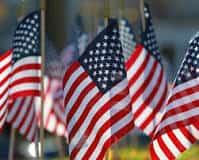 town as far as any regular celebration went.  Many families entertained company for the day. Flags were in evidence throughout the village.

“The Westford men serving on state guard duty in Boston have all been equipped with leather jackets and warm woolen gloves by the town.  They have also been furnished woolen uniforms by the state. It looks now as though they might soon be released from their long tour of duty, dating back from September 10.

“Tadmuck Club.  The first meeting for November of the Tadmuck club, which came on Armistice day, proved appropriate and well attended.  In the absence of the president, Mrs. Roudenbush, the vice president, Mrs. Buckshorn, presided and introduced Miss Eva M. Lord, the public health nurse, who gave a most interesting account of her nursing service overseas….

“About Town.  The Abbot Worsted Company are making valuable improvements about the environments at their Brookside mill.  Tarbell, of Lowell, the landscape gardener, has laid out the grounds at the Hamblett cottage for driveway and walks, shrubbery and many other landscape improvements.  The front yard fence, so long thought to be an ornamental necessity in ye olden days, has been removed, the buildings are being newly painted and everything in environments is being arranged to spell prosperity.  On the opposite side of the street much the same is being ushered in with the addition of a garage midway between the two cottage houses, and Brookside is on the map like all else that the Abbot Worsted Company touch and their generosity and love of betterments.

“Joseph Wall, our local game warden, has been liberating a supply of ducks and pheasants, hoping that they will be unmolested during the open season.  Let us see how good we can be and obey the request of our efficient warden.

“Pleasantly Surprised.  A surprise party sprung a move on last Saturday evening towards the Banister home on the Lowell road.  This spontaneous movement was in honor of 1st Sergt. Seth W. Banister, recently returned from war service….  About seventy, more or less, were at the party…. After everybody had spoke their piece of sociability to one another and shuffled cards and played games generally, came the real come together spirit of the occasion, when W. R. Taylor, in behalf of the contributing inhabitants assembled and some not assembled, presented Sergt. Banister with a traveling bag with all the modern inside conveniences of a traveling bag, an up-to-the-minute umbrella and a purse of money with its world-wide innumerable conveniences.  Sergt. Banister responded briefly but to the point. Every word had a point none of them being dull….

“Grange.  The meeting of the Grange on last week Thursday evening was a real overflow affair, such as neighbors’ night usually brings out but a little unusual overflow this time.  Groton Grange was special neighbor on this occasion. Tyngsboro Grange was over, bringing with them like Groton Grange the friendliness of a spontaneous good time. Other Granges were also represented, Pepperell, Chelmsford, Ayer and Littleton all added to the cheer of a full house….

“An Efficient War Family.  Harry O’Brien has recently returned from war service across yonder, near where Germany dealt out slaughter.  He entered as Private O’Brien and returned as Lieut.-Col. O’Brien, and was wounded twice….

“Graniteville.  Many of the local football fans accompanied the Abbot Worsted Co. eleven to Lawrence last Saturday, where the A.W.C. team defeated the Lawrence Thistles by the score of 3 to 2.  A large crowd of Forge Village fans went to Manchester, N.H., on last Tuesday when the Abbot Worsted Co. team met with defeat at the hands or rather the feet of the strong Amoskeag club by the score of 3 to 1….

“The new garage [on Broadway at River St.] being built by Russell Furbush is rapidly nearing completion.  It is expected that the building, fully equipped, will be ready by the first of the month.”