“Center. The dental clinic at the Frost school is making good progress under the direction of
Drs. Sullivan and Stanford.
“The Reo automobiles driven over the road from the factory at Lansing, Mich., passed through
Westford last Sunday afternoon, making a brief stop at Mr. White’s home [62 Main St.]. There
were six Reo trucks and two touring cars. They had a successful trip home with the exception of
rain and mud. The principal cities passed through after Lansing were Jackson, Toledo, Oberlin,
Cleveland, Erie, Buffalo, Syracuse, Utica, Albany, Pittsfield, Springfield and Worcester. The two
ladies, Mrs. Wells and Miss Scribner, who drove the two touring cars, stood the trip nicely and
proved themselves very capable chauffeurs.
“A meeting of Company H, M.S.G., was held in the town hall on Tuesday evening, Capt.
Edward Fisher presiding. Forty-five emergency enlistment men were granted discharges, and six
whose term was out, leaving nineteen still in the company.
“Tadmuck Club. The closing meeting of the season for the Tadmuck club took place on
Tuesday afternoon at the Unitarian vestry. There were about 100 members and guests gathered
for the luncheon. The waitresses were a group of academy girls in white. Mrs. Goldsmith H.
Conant presided as toastmistress and filled this office with gracious wit and wisdom. The
principal speaker of the afternoon was Mrs. Gail Cleland, of Littleton, who gave a charming
narrative of three years in Japan, given from the woman’s viewpoint portraying the home life,
customs, dress, etc., of the Japanese people….
“The new officers are Miss S. W. Loker, honorary president; Mrs. Hammett D. Wright, pres.;
Mrs. Harold W. Hildreth and Mrs. W. C. Roudenbush, vice pres.; Mrs. A. H. Sutherland, rec.
sec.; Miss May E. Day, cor. sec.; Mrs. Perley E. Wright, treas.; department leaders and
committees will be given later.
“About Town. The wheelwright shop at Brookside, an old landmark for more than a century,
has been torn down by the Abbot Worsted Company, being part of the property they bought of
George C. Moore. This old shop has been moved several times. It is remembered by the older
residents of the town and especially in the Stony Brook village, as the wheelwright shop of the
late Ephraim A. Harwood, and this in the palmy days of the wheelwright business, when this shop
was kept busy to its capacity and more, when a sawmill and a gristmill was the extent of
manufacturing at Brookside. About 1861 this water power, then owned by the late Theodore H.
Hamblett, and the Ephraim A. Harwood property was sold to Craven &amp; Moore, of Graniteville,
and changed to a woolen mill, and later bought by George C. Moore, and the present large brick
mill erected.
“P. Henry Harrington, of Graniteville, the well-known reliable contractor, has been awarded
the contract for the building of the social hall and club house and eight cottages for the Abbot
Worsted Company at their Brookside mill. The stone for the cellars is being supplied from the
old wall that the Chandler field is bounded on the north with. They are being handled by motor
truck.
“The Parkerville school as usual is on the key of action and gave a Victrola concert and play
last week Thursday evening. The following children took part: Mother Goose, Ethel Griffin; Bo-
Peep, Hazel Sweetser; Boy Blue, Frank Jarvis; Simple Simon, Goldsmith Conant; Jack Horner,
Alexander Bognoff [Gorbunoff]; Jack and Jill, Linwood and Ruth Nesmith; Tom Tillemouse,
Lydia Griffin; Old Man in Leather, Edward Griffin; Wee Willie Winkee, Charles Young.
Characteristic were William Bognoff, Tessie Bognoff, Elizabeth Nesmith, Clarence Martin, Ellen
Martin, Marjory Wilson, Paul Cutler, Ellen Worthen. This school is noted for its sociability.
“The ever welcome nightly whippoorwill has commenced his season of evening serenades. It
is a welcome change from the peep of the frog, who has held forth since the spring thawed him
from his winter quarters.
“Baseball. Manager McCarthy of the Abbot Worsted Company baseball club is getting an
aggregation of ball players together that will furnish some great sport for the baseball fans …
during the summer. This team will meet some of the fastest clubs in the state. The club will be
composed of the following players, with more to be added later: Liston and Sheedy of Lehigh
college; ‘Eddie’ Boyce, formerly of Boston college and later with Fitchburg; Fallon and White of
Tufts; Bulger, a Concord boy, who played with the Maynard town team last year; Freeman and
Bridgeford, last year with the Lamsons; ‘Bing’ Falls of Lowell, and [William F.] Buckingham,
the fast local fielder, who played with the 2 nd Division A.E.F. team last summer in Germany….
“Littleton
“News Items. Westford academy baseball team defeated Littleton high at Westford last week
Friday by the score of 11 to 4.” 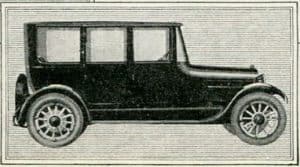 The 1920 REO 5-passenger sedan sold for “$2750 f.o.b. Lansing, plus Special Federal Tax”
per their Christmas advertisement.