“Center.  Mr. and Mrs. James L. Kimball are converting some of the unused room in the ell of the Luce homestead [25 Main St.] into a cosy [sic] apartment for themselves to use during their stays in town.  This consists of living room, kitchenette, bath and a built out screened-in porch and will make a pleasant place for them adjacent to their other properties.

“George F. White and Myron C. Taylor have been in Springfield this week attending the business meeting, sale and banquet of the Ayrshires Cattle Breeders’ association of New England.  Mr. White, who owns a fine herd of registered Ayrshires in Westford, is one of the directors of this association.  Accompanying him on the trip were Mrs. White, president-elect of the Tadmuck club, and Mrs. Helena M. Bartlett, who attended the state federation of women’s clubs’ annual meeting.  These two meetings coming in conjunction made attendance at both for the ones especially interested most convenient.

“It was a lively and hard contested game of baseball that took place at Whitney playground between the teams of Westford academy and Groton High school Wednesday afternoon.  Groton was the winner with a score of 11 to 10.  In the tenth inning with two men out seven runs were made.  A good company of interested fans for both sides made things lively all the afternoon.

“Union Memorial services are expected to be held with the Graniteville M.E. church this year.  The church there are installing a new organ and making other repairs and if they are not in readiness for Memorial Sunday the First Parish has extended a cordial invitation to meet with them.  Definite notice will be given next week.

“The Salvation Army drive for funds in Westford has been successful this last week in charge of Frank C. Johnson.  Nearly the quota of $80 had been reached the middle of the week and the rest easily in sight.

“The Legion play is the topic of interest this week.  Given at Forge Village Friday evening and at Westford town hall Saturday evening.  The play is the ‘The American flag’ a drama in three acts.  Frank Johnson, Harold and Leon Hildreth and Seth Bannister, all overseas men, are in the cast.  The Precious orchestra will provide music.  Let everyone give this their loyal support.

“At a special meeting of the Tadmuck club Tuesday afternoon at Library hall Mrs. George F. White was elected president in place of Mrs. H. D. Wright, who was unable to serve on account of sickness.  The membership paid Mrs. White the compliment of being present in representative numbers to carry through this election.

“Graniteville.  Twelve barrels of white adult perch measuring from seven to ten inches long were recently placed in Burgess pond by Joe Wall, the local fish and game warden.  All the fish were in prime condition and came through the Lowell Fish and Game association.

“About $400 were collected by the Abbot Worsted Co. and the employees of the three mills for the Salvation Army Service fund.  There were also several other private contributions.  The C. G. Sargent Sons Corporation subscribed $25.00.  The committee in charge are deeply grateful to all those who helped in this worthy cause.

“Commencing Monday, May 21, there will be an increase in wages in the three mills of the Abbot Worsted Co., in conformity with those of other mills.

“Forge Village.  The first aid class of the Abbot Worsted Co. held a banquet in Abbot hall Thursday.  The committee in charge was Mrs. G. Sargent, Misses Emily Collins and Harriet O’Neil, and many congratulations were received on the splendid supper and entertainment that was afforded.  The tables were prettily decorated with cut flowers and favors.  After the supper music and games were enjoyed until a late hour.  The class has finished the course that was provided by the Abbot Worsted Co., under the direction of Dr. H. Coburn, and all passed a successful examination and are now qualified to render first aid.  The members are planning to take an advance course next winter.

“Westford post, A.L., celebrated ladies’ night on Friday of last week with an excellent entertainment and dance.  The Mandolin club of Graniteville rendered the first number on the program.  Miss Alice Mae Gilson was heard in several pleasing vocal numbers.  John Kelly rendered a vocal solo, followed by a piano duet by Misses Florence Caunter and Hilda Sugden.  Miss Rebecca LeDuc sang ‘Because’ and responded to an encore.  Frank Charlton sang, ‘Let the rest of the world go by,’ and a selection by the Mandolin club concluded the program.” 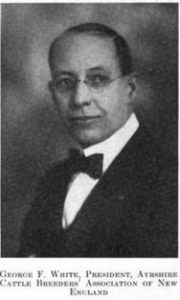