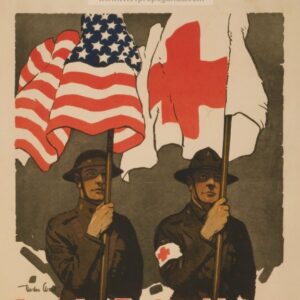 “Center. There are some cases of scarlet fever in town. Dr. Blaney’s little son has the disease, although reported as not a severe case. The other patients are at the other villages.
“Sunday services were much affected in attendance by the hard northeast rainstorm last Sunday. It was mothers’ day and the emblem of the white flower was in evidence. At the service on Sunday morning Rev. O. L. Brownsey will take for his subject, ‘The light of the world,’ and at the evening service ‘Will power’ will be the subject. Sunday school and men’s class at noon.
“A big ‘welcome home’ flag has been purchased by the local Red Cross and hung this week. The flag is of handsome design in the national colors, with the words of welcome, the Red Cross emblem and the number representing the Westford men in the service. We are told all three villages have one of these flags.
“Mr. and Mrs. Robert H. Elliott, of Lowell, came Wednesday to their pleasant summer home [6 Priscilla Lane, formerly 20 Hildreth St.] for the season. Mr. Elliott has been having various improvements made to the house and grounds.
“The Chelmsford high school team played the academy nine on Wednesday afternoon, the visitors winning by the score of 8 to 1.
“The board of selectmen are to buy for the public health nurse, Miss Weir, a Ford Sedan. The Red Cross is to donate $500 of its funds and the town will pay the balance, the total cost being $933, and the town paying for operation and repairs.
“The victory loan followed its precedents and went over the top $171,000 strong, its quota being $165,000. The following committee of the state guard had the campaign in charge: Capt. Charles W. Robinson in charge; Capt. Robinson, Lieut. H. V. Hildreth, Lieut. William W. Robins, Sergt. J. A. Cameron and Sergt. A. W. Hartford, executive committee….
“Graniteville. The mission for English-speaking people that was given by Rev. P. J. Phelan, O.M.I., of Lowell, came to a very successful close in St. Catherine’s church on last Sunday afternoon at three o’clock and was largely attended. The mission for the French-speaking people will open in the church on Sunday, May 25.
“The Graniteville A. C. played the Forge Village club on the local grounds last Saturday and the Forge Village boys won by the score of 12 to 5. Guichard and Reeves did the battery work for Graniteville, while Tessier and Prosnick were on the firing line for Forge Village.
“A strong baseball team that will be known as the Abbot Worsted Company club is now being formed here and the manager would like to arrange games with Groton, Shirley, Townsend or any of the strong clubs in the surrounding towns. Address A. R. Wall, Graniteville.
“Westford Grange is planning for a social dance to be held on Friday evening, May 23, when all the old-fashioned dances and also the modern ones will be given. This affair is under the direction of Joe Wall, so you can count on a good time from start to finish.
“This is great fishing weather for the boys; many of the old boys are also enjoying it.
“About Town. Amos Polley, on the Prairie farm, has planted quite an acreage of popcorn and is now busy with the Aspinwall potato planter for William C. Edward, Capt. Monahan and others at Westford Corner.
“Daniel H Sheehan has been busy removing much of the personal property belonging to his cider mill. This he has been storing at his home on the Stony Brook road.
“Mrs. Ella Wright is expected from Cleveland at her summer home at Brookside.
“Ayer
“Camp News. The land within the limits of the permanent camp will pass under government ownership beginning May 20, the date on which Major Robert Bonner, quartermaster acquisition officer, has been instructed to institute condemnation proceedings. On that date the army will take over the land, cancelling leases and stopping rentals. Owners of property who have not signed preliminary agreements to sell have been requested to visit the land office immediately in order to avoid tangles.
“The land covered by the artillery range has been returned to the owners and the summer cottages around Spectacle pond will reopen. Farmers may now repair shell holes in their homes and barns, reopen wells and put their cattle to graze on fields splattered with shrapnel and shell. Leases on this property do not expire until a couple of months from now, but the army has no further use for the land.
“Announcement that all drafted soldiers will be discharged by June 15 was made last week.”