“Center. Next Tuesday afternoon at Library hall there will be a special business meeting of
the Tadmuck club to elect a new president. Since the annual business meeting two weeks ago
Mrs. Hammett D. Wright has been obliged to resign, because of ill health. The members very
much regret that Mrs. Wright is unable to serve, but are very fortunate to have Mrs. George F.
White to take her place feeling that she will administer the affairs of the club with ability.
Members are urged to be present at this meeting.
“‘The old order changes giving place to new.’ The observance of Memorial day so long in
charge of the Veteran association will be turned over this year to [the] local post of the A. L.
[American Legion], Frank C. Johnson, commander. They will appear out in force and do escort
duty for the older veterans and the Sons and Daughters of Veterans. It is expected the new
Graniteville band will furnish the music for the day. Mrs. Nettie O. Roberts will be the soloist,
and the speaker of the day will be announced next week.
“The members of the senior class of the academy, who gave the two-act comedy drama, ‘Mr.
Bot,’ at the town hall last week Friday evening, acquitted themselves well and the play was much
enjoyed by a large audience of interested parents and friends of the young people. The seven
young people in the cast were as follows: Forrest White, Julia Donnelly, Pamylia [sic] Precious,
Mildred Precious, Webster Flagg, Dorothy Shugrue, Conrad Cote. The play was under the
capable direction of Mrs. Harold W. Hildreth. It was prettily staged and a good sum was realized.
“The academy graduation comes on Wednesday, June 16, at the town hall. The valedictorian
is Miss Mildred Precious, the salutorian [sic] Julia Donnelly, historian Julia Martin, class prophet
Forrest White, class will Pamylia Precious. Miss Edna Sargent presents the class gift, which is
accepted for the class by Julia Hunt of the junior class.
“It is pleasant to report the Abiel J. Abbots at home [32 Main St.] again, also Mrs. McDaniels
and Miss Wood at the Luce homestead [25 Main St.] have arrived for the summer from
Cambridge and the Robert H. Elliots are at their summer home.
“About Town. Tompkins, the well known poultryman of Concord, was recently awarded by
a jury $12,500 damages for the loss of 11,000 Rhode Island reds, as the result of eating salt in
grain bought of a well known grain firm of national and world fame.
“Apples do not promise, except in spots and spots miles apart. This as it relates to winter
apples. Early apples promise better and nearer apart. But even early apples do not agree on
promising a last year’s break down. Peaches are postponed for a year on account of the weather.
“The Abbot Worsted Co. have nearly completed the handsome brick garage at their Brookside
mill. It is nearly opposite the T. H. Hamblett place [11? Brookside Rd.].

“Forge Village. A food sale was held in St. Andrew’s mission, Wednesday evening, by the
Ladies’ Sewing circle. Sandwiches, cakes and fresh made doughnuts were sold in large numbers.
A good sum was realized for the sale.
“Graniteville. There does not appear to be any change in the strike situation at the machine
shop of the C. S. Sargent Sons’ corporation here. There are about 110 union men out while those
not connected with the union still remain at work. The strikers are strong in their demands for an
increase in pay for ten cents per hour, time and a half for all overtime, double pay for Sundays
and holidays and recognition of the union. They have strong hopes of winning out, but so far the
firm has refused to discuss the matter from any angle. All the strikers received their full pay from
the company. The strikers are still doing picket duty near the shop. A uniformed police officer
from Lowell is on guard duty at the shop gate and is having an easy time of it for there is not the
least sign of trouble.
“The Abbot Worsted Co. band held a well attended rehearsal in the hall here on Monday
night. The members appeared in their new uniforms for the first time and made a fine
impression. The band is progressing rapidly and is bound to give a good account of themselves
when they play at the exercises in Westford on Memorial day.
“The cool weather is holding up the spring planting for the time being.
“The girls’ baseball club is getting in some good practice work two or three times a week.
Their new uniforms will be ready soon.” 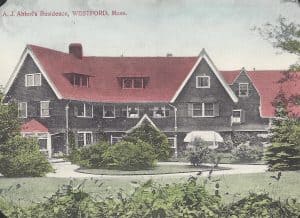