“Graniteville.  The Abbot Worsted Co. team defeated the General Fireproof club of Newton on the home grounds here last Saturday by the score of 8 to 1….

“On next Saturday the strong Natick town team with ‘Eddie’ Casey of Harvard football fame, Brennan, ex-captain of Andover, Comiskey of Holy Cross, Howard of Mercersburg, and others equally as fast will visit here for a game with the Abbot Worsted Co. team.  Moseley, the star pitcher of Worcester academy, will be on the mound for Natick.  Quirk will do the catching.  The battery for the Abbot Worsted team will be Peters, the big left hand college pitcher, and ‘Tacks’ Connell, formerly of Fitchburg N.E. league, on the receiving end….

“On last Saturday Alfred W. Hartford of Westford, who for the past 22 years has been associated with the Wright & Fletcher store, severed his connection with that firm.  He was presented with a substantial cheque from the firm as a reward for faithful and efficient service.  Mr. Hartford leaves the store to engage in the insurance business, with an office in Lowell, but will retain his residence in Westford where he is interested in all things pertaining to the public welfare….

“The native strawberry harvest is well underway and the berries are of extra good quality.

“The large auction sale of household furniture at William R. Carver’s Thursday has been an event of interest.  Pleasant weather and the extent and desirability of the goods advertised brought a large crowd of interested bidders.  Wednesday, the day preceding the sale, when the house [63 Main St.] was open for the inspection of the goods to be sold, there was a steady attendance of visitors, many from out of town.

“As soon as Mr. and Mrs. Carver can get away, they, with their children, go to Peak’s Island, Me., near Portland and Mr. and Mrs. Harold Hildreth will move into their newly purchased home….

“About Town.  Frank W. Banister was the first on the list of those who are in the early class with potatoes in blossom June 17.

“Boys’ Camp.  Camp Nabnassett opens Thursday.  More than one hundred boys have signed to be present at the Y.M.C.A. boys’ camp.  It opens with a big dinner Thursday and continues eight weeks, followed by a hike to Lake Winnipesaukee, the Green mountains, a high school conference camp at Becket in the Berkshires and an employed boys’ conference there immediately afterwards, finishing on Labor day….

“Pole Trouble.  The large pole at the intersection of Lowell and Stony Brook road fell Monday by the law of gravitation to the earth instead of to Mars, the next nearest gravitation station.  Representatives of three different companies arrived on the scene to see whose duty it was to restore connections.  The Lowell Electric Light Co. were the first and without getting off their seat they decided that it belonged to the other fellow.  The next other fellow to arrive was officials of the Lowell and Fitchburg street railway company.  After some friendly dialogue engagements with the proprietor of the Taylor house [70 Lowell Road; Sam Taylor is the author of this item], they decided that a trackless railway had no use for poles and the motion was seconded and carried.  The telephone company, as the last other fellow, appeared and claimed its own and proceeded to untangle the wire tangle….  Besides the wires all gossip and other troubles came down with the pole and there was a sudden stillness like a Puritan Sabbath.

“Party and Dance.  A dinner party and dance was given their guests Wednesday night by the Abbot Worsted Co. to celebrate the winning of the silver cup and championship of the Lawrence district league….  J. C. Abbot was toastmaster and speeches were made by James Kelly, Alexander Scott, Robert McCarthy, William Blott, William Kelly and Dr. Coburn.  At the close of the dinner party three rousing cheers were given for the Abbot Worsted Co….  A short, but excellent concert followed the dinner. Messrs. John and James Kelly were each heard in pleasing vocal selections accompanied by John Vinn.  W. Clegg also rendered several songs accompanying himself and being obliged to respond to encores.

“The silver cup was presented by Earle Bennett, treasurer of the Lawrence district league, and accepted by William Kelly in behalf of the Abbot Worsted Co. Soccer team.  Dancing was next in order to which everyone in the community was invited.  Excellent dance music was furnished by the Misses Caroline, Pamelia and Mildred Precious….” 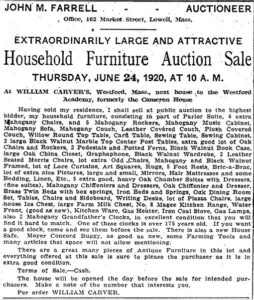