“Center. Mrs. Alice M. Wells [widow of Dr. Orion Wells] has exchanged her Reo
automobile for a new this season’s model of the same make.
“Some of the outlying farmers have had strips of road in front of their buildings oiled, thereby
enjoying a dustless summer as well as the more thickly settled villages.
“Republican Outing. It is reported all roads will lead to Whitney playground, Westford
Center, this Saturday afternoon, for all arrangements have been completed by the committees to
make it a rousing event, all that being needed is the cooperation of the weather man.
“This affair is under the cooperative efforts of the Republican leagues of 14 towns in this
vicinity….
“About Town. The squash and pumpkin vines in South Westford (Parkerville) report a frost
Sunday night. This does not come under the Sunday sports bill, but it may be less damaging.
“Charles Robey, who put in two weeks of smart work haying for Amos Polley, has gone to
Silver Mills, Me.
“A petition is being circulated in town asking for a referendum on the bill legalizing boxing as
a sport, passed by the last legislature.
“Albert R. Jenks has resigned as horticultural agent of the Farm Bureau. He will devote his
time to his recently purchased farm in West Acton….
“We wish to correct an error in regard to a subscription for the rebuilding of the village church
at West Chelmsford that we reported last week. Fifty dollars was given by the Nabnassett Camp
Boys and $250 by boys in West Chelmsford. Aside from this $5000 or more has been subscribed
by various individuals and $5000 more is expected to be sighted. Liberals of all shades of
opinion have contributed liberally. Brookside has replied by it generous contributions and its
widows’ mites. The usual generosity of Oak hill has come to the rescue with a liberal offer when
all subscriptions are pledged. Oak hill is always liberal in its gifts as well as liberal in its
thoughts. [Oak Hill in northeast Westford was the home of Herbert E. Fletcher, proprietor of the
firm of H. E. Fletcher &amp; Co., granite dealers and contractors of West Chelmsford, and the
location of the Fletcher granite quarries.]
“Amos Polley reports that his sweet clover, which grew six feet tall long and is coarse
accordingly the cattle refuse to eat even enough to make a cud of. As this is the first ever raised
in this vicinity it is easy to see the mistakes. First it wasn’t sowed thick enough hence its length
and coarseness. Second it should have been cut at least two weeks earlier, but good authority
said, “Wait until it is in blossom.” As we helped to cut it we waited until six feet tall and no
blossom. How many more feet before blossoming? Don’t know and couldn’t wait to see. The

third mistake was in allowing it to dry and toughen in the sun for a week after cutting. That it is a
fine dairy food there is no doubt. Much like alfalfa.
“As per rules of the insurance company that insured the West Chelmsford church the trustees
engaged a competent person to make an itemized estimate of the loss caused by the fire. The
trustees engaged Capt. John J. Monahan, who lives opposite the church, of the well-known firm
of Edwards &amp; Monahan, who built the church thirty-three years ago. His estimate, after a careful
survey, was $25,000, which seems to be about par.
“The government has a squad of inspectors in automobiles inspecting corn fields in town for
the corn borer. The corn borer has appeared in the adjoining town of Chelmsford alarming
enough to have the government stretch large warning signs across the highway forbidding
bringing green corn into town under heavy penalty. Such a sign is posted across the Lowell road
beyond the residence of Miss Ella T. Wright, the old Levi T. Fletcher place near town line [120
Lowell Road]. The corn borer is a most destructive pest to corn and the government is making a
systematic and determined effort to stamp it out or limit its territory in Westford.
“Ayer
“News Items. The following is the report of the fourteenth census of Ayer and surrounding
towns and the population in 1910: … Westford 3170, 2851. The first figures given for each town
are the new 1920 ones.
“District Court. Edward O’Malley of Lowell pled nolo to a charge of not blowing his horn at
an intersecting street in Westford on Sunday, the 18 th . His case was placed on file on payment of
costs.” 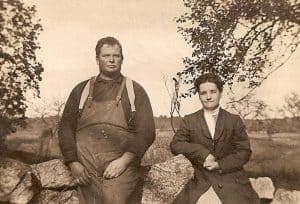 Amos (1878-1953) and Valina (Tallant) Polley on Lowell Road were neighbors and close
friends of Samuel L. Taylor, author of the About Town section of The Westford Wardsman.
Courtesy Photo/Westford Historical Society.