“Center. Miss Maude Robinson has accepted a position, going Monday, at Thompson’s
Island, where she is to teach 6 th and 8 th grades. The boys in this institution are from ten to
fourteen years old. This is where Clarence Colburn, son of the late J. Henry Colburn, is at the
present time.
“Forrest S. White returned Wednesday evening from his second trip to Lansing, Mich., to
drive home a [Reo] machine from the factory for his father. This trip means about a thousand
miles of driving and was successful in every way.
“Mrs. William C. Roudenbush and Miss Ruth Tuttle attended the meeting of Mrs. Reed’s
clothing efficiency class at Waltham Tuesday of this week.
“This coming Sunday will be the last Sunday of [Congregational] church services before the
summer vacation, which includes the Sundays in August….
“When the call came for help with the new auto equipment from West Chelmsford in the early
hours last week Friday morning a quick response was made by the men of Hose Co. No. 1, but
without avail. Everybody was sorry to hear later that the pretty village [Methodist] church was in
ruins….
“The band concert by the Abbot Worsted Co. band on the common Sunday afternoon …
proved very successful. The weather was ideal and there was a large attendance from this and
surrounding villages. The musicians under the direction of Mr. Larkin did excellent work and
their concert with its well-chosen numbers were much enjoyed.
“About Town. The Boston and Maine railroad have painted the iron bridge on the Stony
Brook road that spans the Stony Brook highway close by Stony brook for which the rest of the
Stony brooks are named. We are glad to report that it has been painted a more attractive color,
being a light blue drab. Prior to this the color has been darker than a starless moonless midnight.
“Fire. Last week Friday morning about three o’clock the whistle on the Abbot Worsted Co.
mill at Brookside sounded the fire alarm and the engine of a passing freight train from Ayer to
Lowell also sounded the fire alarm and the bell on the village church at West Chelmsford rang the
fire alarm for the village church, which was totally destroyed by fire. The Westford Fire
Company was sent for and made the trip of four miles in a hurry-up time with their new chemical
engine, which had just arrived in town a few hours previous. A fire company from Lowell
responded and the fire company of 25 members from Chelmsford Center with fire extinguishers
responded, but all efforts to save the church building were unavailing and the most that could be
done was to save nearby dwellings, which the fire threatened enough to cause the household
goods to be removed.

“Fred Fletcher and George Spaulding, the district fire wardens, … immediately organized a
line of water buckets until the arrival of the fire companies, but the fire was speedy in its work
and everything in the church perished in the flames, including the rope that rung the bell and a
pipe organ installed about five years ago.
“The cause of the fire is not fully known, but the severe electric shower the afternoon previous
is supposed to have disarranged the electric wires that light the church so that Friday evening at
eleven o’clock when the lights were turned on to return settees used for the band concert it started
the fire from disarranged wires.
“This village church, known from the sectarian point of view as the M. E. [Methodist
Episcopal] church, was built thirty-three years ago by Wm. C. Edwards of Westford, the well
known contractor, now of the firm of Edwards &amp; Monahan, at a cost of $5000…. The greatly
increased cost of building led the trustees of the church to investigate the probable cost of
replacing the building with a view to more insurance. This investigation estimated that the
building and contents could not be replaced for less than $28,000. Fortunate for the church, with
these figures the trustees added $12,000 more insurance, making a total of $18,000 insurance.
“The church was located on Main street about six rods over the Westford line, being centrally
located for Brookside, Nabnassett, Whidden’s Corner, Oak hill [all in Westford] and West
Chelmsford. It was a handsome little structure and added thrift and safety to the appearance of
the village….
“At a meeting of the second quarterly conference of the West Chelmsford M. E. church held
last week Friday evening … a large and enthusiastic gathering … unanimously voted to start on
plans for a new church…..” 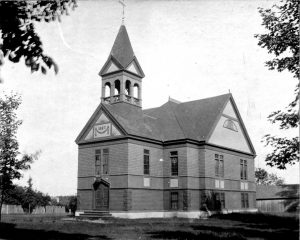