“Center. The overseers of the poor and the board of selectmen held their annual meeting
Saturday to discuss future plans for the town farm. Mrs. Charles Ripley, matron, served an
excellent dinner at noon.
“The annual town meeting comes in February and preceding that, about January 18, there will
be a special town meeting to discuss town finances.
“The Edward M. Abbot Hose Co. held its monthly business meeting and supper Wednesday
evening at the firehouse. A first-rate supper was served in charge of Messrs. Spalding, Prescott
and Greig. The committee for the fireman’s dance held thanksgiving eve report a balance for the
treasury of $45.
“Alfred W. Hartford entered on his new duties at the State house Wednesday of this week as
representative from this district.
“New telephones in the village are at the Hanscom family on Boston road, 103-5, and John C.
Abbot has installed a telephone at Mr. Peterson’s house on Forge Village road, 8-11.
“The scarlet fever cases are reported as doing well with no new cases. The children in the
Sydney W. Wright household have been as severely sick as any.
“The dancing party under the auspices of Westford post, American Legion, which took place
at the town hall New Year’s eve, was one of the pleasantest and most successful parties of the
season. The Colonial Singing orchestra of Waltham furnished very excellent music for dancing.
There was a good attendance from the Center and surroundings and it was a most successful
holiday dance. About $25 will result for the Legion treasury.
“William E. Wright, Rev. William E. Anderson, H. G. Osgood, George Spalding and L. W.
Wheeler attended a meeting of the Nashoba Fruit Growers’ association Wednesday afternoon at
Oddfellows’ hall, West Acton. They report an excellent and worth-while meeting.
“Westford’s report for Herbert Hoover’s fund for the starving children of central and eastern
Europe is $812.45. Frederic A. Hanscom has been chairman of this drive and it has been well
organized with good helpers in various parts of the town….
“L. W. Wheeler has received this week from E. J. Whitney, spending the winter at Kissimmee,
Fla., an interesting box of southern fruit containing oranges, tangerines, guavas, prickly pears and
blossoms from the banana, showing the clusters of ‘fingers,’ which develop into bananas. Last
but not least was a real jumbo lemon weighing 2 ¼ pounds. This big lemon with green leaves
attached is on exhibition at the postoffice, just as prize apples are brought into the office during
the fall months.
“About Town. It is unofficially announced that the new clubhouse of the Abbot Worsted Co.
of Brookside will open next Wednesday evening for the ‘movies’ and other movies.

“Wallace Johnson is cutting ice on Burgess pond for the local winter trade. We learn that the
ice is four inches thick and is daily diminishing under the pressure of weather that is nearer the
temperature of summer than the temperature of zero, but there is plenty of time for ice to get its
growth before it is time to plant potatoes St. Patrick’s day, March 17.
“Mr. and Mrs. William J. Haley of Graniteville have moved into the clubhouse of the Abbot
Worsted Co. at Brookside.
“It is being planned for a special town meeting about January 18 to consider financial matters
preparatory to the annual town meeting in February. We expect that one of the financial
questions to be discussed will be rebuilding the barn at the town farm recently destroyed by fire
and all its contents. As a financial proposition it might be cheaper to sell out and board out, but
the consideration of the poor rests on something more humane than the mere question of which
way it can be done cheapest. This is a town home with home environments and not a boarding
house with commercial environments.
“Among the other improvements of the Abbot Worsted Co. at Brookside is the culling out of
the hard pines in the rear of their new cottages and preserving the white pines. We are informed
that Almon S. Downing has charge of it and will saw the wood into stove lengths.
“Geese have been reported seen flying north. If this means business for good, what will ice be
an ounce?
“Graniteville. The Abbot Worsted Co. soccer club of Forge Village were defeated by the
Hendee Indians at Springfield in the semi-final for the state cup in Quincy last Saturday by 5
goals to 1. Many of the Forge Village fans took in the game and the result was a great
disappointment to them.” 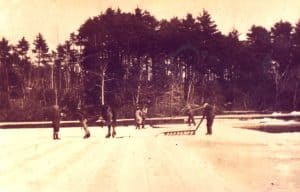