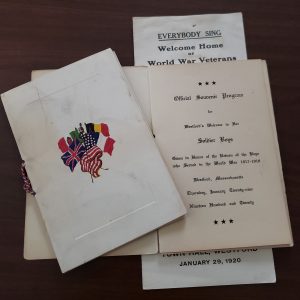 “Welcome Home Celebration. Not since armistice day in 1918 has Westford had so
important a day in its history as was last Thursday at the town hall, when its townspeople
welcomed home her men who served in the world war. The difference in the two days was the
spontaneous unpreparedness of the first, and the carefully planned for arrangements of the latter.
… Of its successful culmination those in whose honor it was planned and the townspeople owe a
debt of gratitude to the faithful committee in charge. Bright winter sunshine and not too cold a temperature favored the day’s plans.
“The decorations were beautiful and appropriate. The hall outside and in was draped with red,
white and blue. Over the entrance to the building the word “Welcome” in large letters, and which
was illuminated at night, was the center of decorations….
“The festivities began at four o’clock in the afternoon when a reception to the soldiers, sailors
and nurses wearing their service uniforms was given them by the townspeople. The hall was well
filled with parents, relatives and friends. People’s orchestra furnished music throughout the
afternoon and evening events, and Albert E. Brown, of Lowell, was the song leader.
“At five o’clock General Clarence R. Edwards arrived. He was escorted to the hall by Capt.
Sherman H. Fletcher, preceded by a double rank of the veterans who formed in a double line in
the hall extending from the door to the stage, and saluted as the general passed down through,
followed by his staff. The little group of civil war veterans had their place of honor. They, with
the selectmen and presiding officers, took their places at one side of the stage, and the veterans
filed out of the hall again and returned again individually to hear the general’s message to them.
“General Edwards was introduced by Hon. Herbert E. Fletcher and responded with a
memorable address. Looking every inch a soldier, and with an eloquent band of black on one
arm, denoting his personal sacrifice to the toll of the war [his daughter died of influenza in 1918
while in Army Nurses training], he gave a direct and thoughtful message.
“A joint tribute to America’s fighting men, the menace of the insidious doctrines of pacifism
and cowardice, the spirit of the military salute and what it stands for, ‘carrying on’ and playing
the game with the fine spirit of a good soldier at home, were among the points finely elucidated
by General Edwards. Many a glint of humor graced his remarks. In closing he highly endorsed
universal military training.
“The general received a tremendous ovation and saluted often in acknowledgement. Later,
there was an opportunity for the townspeople to meet him, and nearly everyone availed himself of
the chance to meet the far-famed leader of the Yanks. For nearly half an hour he stood and shook
the hands of parents, relatives and friends of the veterans as they filed by.
|“Dinner was served in the lower hall at six o’clock. Page of Lowell catered and served an
elaborate and delicious menu.
“Albert E. Brown, of Lowell, led the singing of the old and new songs and also sang several
solos. General Edwards was obliged to leave early for a similar occasion in Lowell, but at the
close of the dinner spoke briefly to those present. His advice to all veterans was to join the
American Legion and [he] also made a plea for memorials utilitarian in character.
“Before the festivities were over each service man was presented a bronze medal on a watch
fob as a token of the appreciation from the town, and each was also given an engraved certificate
giving the man’s service for the town of Westford and [the] United States of America in the great
world war. As each presentation was made the recipient was heartily applauded…. Tribute to the
following men who died in service was paid: Lieut. Orion V. Wells, Privates J. N. Brule,
Napoleon J. Lanctot, Adlat Langley, Antonio Palermo, Charles Smith and Bernard J. O’Hara.
“Following the ceremonies in the banquet room a dance in the upper hall lasted until past
midnight.
“The committee of arrangements were: Capt. Sherman H. Fletcher, chairman; Lieut. Herbert
V. Hildreth, secretary; Hon. Herbert E. Fletcher, Alfred W. Hartford, Capt. Charles W. Robinson,
Albert R. Wall, P. Henry Harrington, Oscar R. Spalding, Frank L. Furbush, Wesley O. Hawkes,
Elmer E. Nutting, John Edwards, Frank C. Wright, Elbert H. Flagg, Thomas Costello, Mrs.
Herbert V. Hildreth, Mrs. Alfred W. Hartford, Mrs. Hammett D. Wright, Mrs. Annie Precious.
“Graniteville. February 1 came in with one of the coldest mornings of the winter, the
mercury registering 30° below in various parts of the town….”