A look back intime to a century ago
By Bob Oliphant

“Center. A merry Christmas and Happy New Year to the readers of this column.
“The selectmen of Westford and Chelmsford have offered a reward of $500 for the
apprehension and conviction of any one having to do with the recent and frequent fires, which
have destroyed so much property.
“Miss Marjorie M. Seavey has the sympathy of her many friend on account of the manner in
which she is obliged to spend her Christmas vacation, she being quarantined with scarlet fever.
Morton and Gordon Seavey are boarding at Mrs. George A. Walker’s while their home is in
quarantine with scarlet fever.
“All bills due the town should be in the hands of the selectmen on or before December 27.
“E. Clyde Prescott, master of Westford Grange, is seriously ill at the Lowell General hospital,
where an operation was performed Wednesday of this week. He recently attended the State
Grange sessions at Pittsfield with master elect, Clifford Johnson, and was not well while there or
since coming home, and his sickness culminated in being removed to the hospital earlier in the
week.
“Graniteville. The teachers of the Sargent school, on behalf of the children, wish to express
to the Abbot Worsted Co their sincere thanks and appreciation for the many pretty gifts they
received at the Christmas exercises on Thursday, the last day of school, before the Christmas
vacation of two weeks.
“William L. Wall is now enjoying himself with his new sedan automobile.
“The mill pond here is now entirely frozen over, but the ice is not safe for skating yet. The
small boys are now enjoying the fun of skating on some of the smaller ponds here.
“Abbot Worsted soccer eleven qualified for the semi-final of the State cup competition at
Sullivan square when it trimmed the Gray and Davis team, 4 goals to 1. A big crowd witnessed
the game and the result was a big disappointment to the Cambridge team’s supporters. The
winning team will journey to Holyoke next Saturday, where they will meet the Hendee Indians of
Springfield in the semi-final for the state cup.
“About Town. As a result of establishing the new postoffice, Nabnassett at Brookside, the
free rural delivery of mail on Pigeon hill on the Stony Brook road has ceased. The families
affected are James H. O’Brien, Oliver Desjardins, Daniel H. Sheehan and Bernard Flynn. Their
mail has been delivered from the Tyngsboro postoffice, seven miles distance. They can now have
a choice of several postoffices, Westford center, with free delivery at Taylors’ corner on the
Lowell road, which is the nearest, or Cold Spring at Westford depot or Nabnassett at Brookside.
“The last meeting of the Grange was one of the best of the season and was an open meeting
and was largely musical, and the following were the musical entertainers: Gordon Seavey, cornet;

Morton Seavey, drum; George Anderson, trombone; S. Anderson, flute; Miss Eleanor Colburn,
piano; Mrs. Perley E. Wright, in the role of reader, easily called the company to attention and
they remained so.
“Edmund B. Whitney of Brookside is doing the woodwork in the new foundry company at
North Chelmsford, of which he is a stockholder, as well as all other laborers. This new foundry is
located just east of Riverdale cemetery on Middlesex street. They will employ about fifty hands
when run at full capacity. They have easy switch connections with the Boston and Maine railroad
that bounds them north.
“As several closeby towns have voted to have precinct voting for the election of town officers
and transact the town business at a separate meeting it occurs to some whether Westford should
join the movement. We fail to see anything to be gained for the election of town officers is not as
important as the transaction of the town business and that cannot be done in precinct voting and
when it can all be done in one day at one place we repeat leave to withdraw.
“As several roads in town have never been named it has been suggested that names for these
roads come up to be voted on at the annual meeting. The short road connecting the Chamberlain
road with the Keyes road we suggest be called Francis [sic] Hill road, as it is at the height of land
on Francis hill….
“Ayer
“New Locomotives. The Boston and Maine railway has recently put into service on its
Berkshire division five of the heaviest and most powerful locomotives ever built. They are only
equaled by the engines used to haul trains over the grades of the Rocky mountain roads…. The
locomotives are of what is known as the ‘2-10-2’ or ‘Santa Fe’ type.” 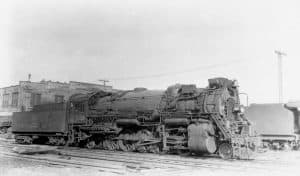 The Boston &amp; Maine took delivery of the first five of twenty &quot;Santa Fe&quot; type locomotives
from the American Locomotive Company in 1920. They were given road numbers 3000 through
3019. Courtesy photo / https://steamlocomotive.com/.