“Center. The Russell family, who have been living on the Collins place at Parkerville, are moving into the schoolhouse dwelling as the Collins place has been sold….
“Harold W. Hildreth has purchased a new five-passenger Ford automobile.
“Dr. Harry R. Coburn, recently discharged from the medical reserve corps, has taken over the equipment of the late Dr. O. V. Wells and will be at the office on September 2. Dr. Coburn comes highly recommended and has had a wide experience in war surgery, having been in charge of field hospitals in France for seventeen months, and the past six weeks at Fort Ontario, Oswego, N.Y. Before the war he was on the staff of the Massachusetts State hospital for nine years.
“Sergt. Leroy E. Bicknell arrived home the first of the week and was given a hearty welcome at the home of his parents. Sergt. Bicknell holds the most distinguished record in service of the Westford quota, having been decorated for bravery in action, and having received all the major medals, having been decorated by Generals Pershing, Petain and Foch.
“Schools open on Tuesday morning. At the academy Miss Etta Crane will be Principal Roudenbush’s new assistant; Mrs. Harold W. Hildreth and Miss Cohen are the other teachers. At the Frost school Mrs. Martha Grant Whiting’s successor had not been selected at last reports, Supt. Frank H. Hill being in Boston attending to securing teachers for the vacancies. Miss Grace Ranney and Miss Mattie Crowley return again and in Miss Edith Wright’s place Miss Maude Robinson will teach until Miss Wright is able to return to school. The school children are to be carried between Brookside and the Center in two motor trucks driven by Everett Miller and Edmund Green.
“Annual Reunion. The postponed reunion and outing of the Spalding Light Cavalry association was held on Thursday of last week with a good attendance of the members and invited guests from Westford and the surrounding towns.
“The clay pigeon shoot was held at Whitney playground in the afternoon, Edward M. Abbot securing first prize….
“The D. L. Page Company served a buffet luncheon and the entertainment of the evening consisted of singing by a Lowell quartet and readings and impersonations by Alvah Sturgis, of Lowell, which were much enjoyed. The other speakers were William Carl, who has served 28 ½ years in the militia and also eighteen months in France. His accounts and descriptions of the western battle fronts received the closest attention. Harold W. Hildreth added to the interest of the evening with his experiences in France.
“About Town. Fifteen bushels of crabapples were picked off one tree in the Stony Brook valley. It is so for the writer saw the fellow do it.
“Fred Emerson, having sold his farm on the state road to Alister McDougall, has moved from town and Mr. McDougall, who is one of the efficient officials of the farm bureau in Hampden-Berkshire county, has taken possession as a tenant for the present.
“Alexander Cameron is superintendent for the Abbot Worsted Company at their Brookside mill.
“Clipping. The following was taken from the Boston Globe under date of Nashua, August 9:
“‘Former Commander Myron Rand of John G. Foster Post, G.A.R., today is celebrating his eightieth birthday anniversary by attending to his regular duties as elevator man in odd Fellows’ block.
“‘Mr. Rand is one of the best known veterans in the city. He lost a leg on the field of Gettysburg….’
“Mr. Rand was one of our Westford boys who went to serve his country in the civil war; August 17, 1861, the 16th Massachusetts left Camp Cameron for the seat of war; there were a goodly number from Westford who went away never to return. Mr. Rand came back to Westford and remained here until he was able to do for himself, when he left town….
“Forge Village. The members of the M.E. church of Graniteville held their Sunday school picnic at Cameron 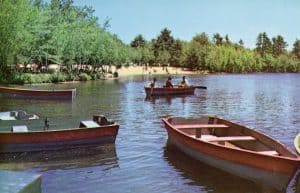 grove last Saturday afternoon. The children enjoyed swimming and other sports during the afternoon.…
“Cameron school will open for the fall term on Tuesday. Mrs. Nelson O’Clair and Miss Nellie McGovern, of Ayer; Miss Mary A. Garvey, of North Chelmsford, and Miss Abbie M. Blaisdell, of Wamesit, will be the teachers….
“The most severe thunder storm of the season visited here last Sunday afternoon, followed by hail stones. The lightning put the electric cars out of commission for two hours. A fuse blew out on the electric light pole at the junction of Pine and Pleasant streets, residents along that section being deprived of electric lights.”