“Center. Foundations are in and work under way for the new home of Alexander Cameron
[10 Graniteville Rd.], opposite the home of his parents [7 Graniteville Rd.], Mr. and Mrs. Julian
A. Cameron.
“The teaching staff for the schools is not complete, but will be given next week. At the
academy, Principal Roudenbush will be assisted by Miss Cohen, and Mrs. Harold W. Hildreth
will assist a part of each day….
“We are told that Everett Miller is to transfer the school children in an auto bus at the
beginning of the school term. 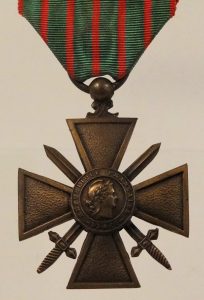 “We quote the following from a recent daily paper; ‘New York, August 18—Sergt. Leroy Bicknell, of Westford, Mass., a member of Company D, 9th Machine Gun Battalion, who arrived on the Agamemnon, wore the Distinguished Service Cross, Croix de Guerre and Military Medal, awarded in recognition of his achievement when, without aid, he rescued a captured machine gun crew. In making this rescue he killed several Germans and took nine prisoners.’ Sergt. Bicknell is the son of Mr. and Mrs. Chas. H. Bicknell, and his safe arrival home to his family and home friends is welcome.

“We hoped to be able to announce the tax rate for 1919 last week, but the assessors were not ready until a day later with their findings. The rate this year is $17 per $1000, against $15.30 last year. The increase in state and county taxes is one reason for this advance. The books will not be committed to the collector for another week, it is expected.

“About Town. The Read-Drew farm on Main street and Stony Brook road [162 Main St.] are
up to the advanced class in methods in orcharding. Of late they have been thinning the Baldwin
apples and sending them to Boston, where they have sold for $1.50 per bushel. They have bought
three [railroad] carloads of boxes, delivered at Westford station. They have harvested 175 crates
of currants which average better than twenty cents per quart box. This modern fruit farm is kept
at thrift point by chemicals mostly. Nearly all the rocky pastures of the once famous Zack Read
farm are covered with fruit trees. The interfering stones have been introduced to dynamite.
There is a very abundant scarcity of help which sets the brakes against the pace they are equipped
for.
“We are glad to welcome Mr. and Mrs. Quincy Day back to town. Mr. Day is engineer at the
Sargent machine shop.
“For the number of trees, David Sherman on frosty Cold Spring road has the best display of
peaches. All the trees are loaded to the prop up point.
“Picking twenty-three quarts of blueberries in 4 ½ hours, or 5.1 quarts an hour, is the
statement of the doings of James B. Tuttle, of Acton, of his efforts, and claims to be the champion

of the county and challenges all on-comers. This challenge will have to be accepted quickly or
the blueberries will all be rainfalls and windfalls. The writer has done the above with berries,
leaves and branches, but Mr. Tuttle is too good and reliable to be built that way.
“Graniteville. Sergt. William F. Buckingham, a Graniteville boy with the famous 2 nd
division, has recently returned from overseas duty and has received his discharge at Camp
Devens. He is now at his home here.
“Forge Village. A fourth-class postmaster’s examination will be held by the civil service
commission in Ayer on September 13, as a result of which it is expected to make certification to
fill a contemplated vacancy in Forge Village. The compensation of the postmaster at this office
was $587 for the last fiscal year. All information may be obtained from the local postoffice.
Mrs. Elmer E. Nutting, the efficient and courteous postmistress, has sent in her resignation to take
effect in September. Mrs. Nutting succeeded her brother the late Daniel Splaine [who died Aug.
10, 1902], who took the office over twenty years ago.
“The Odd Fellows field day at the athletic grounds last Saturday drew a large crowd. The
attraction was a ball game between the Forge Village A.C. and the Abbot Worsted Company
team. The latter won by the score of 19 to 4. Other attractions were sports of different kinds.
Refreshments were on sale. The training school band of North Chelmsford rendered music
during the afternoon.
“Ayer
“News Items. The aeroplane at Camp Devens ran out of gasoline while flying near Concord
last week Friday and landed in a potato field of the Concord Reformatory, turned turtle and was
badly damaged, but the occupants were not hurt. Saturday army trucks brought it to the camp for
repairs.”