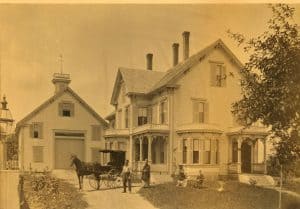 “Center. Misses Sarah, Lillian and May Atwood returned last week Friday from a pleasant winter spent in Florida.
“Charles H. Pickering has been appointed inspector of water faucets in town and has been attending to this duty this week.
“The Arthur E. Days should have been added to the group of Westford people who attended the Symphony orchestra concert in Lowell on last week Tuesday evening. “The coming Victory fifth liberty loan for Westford will be in charge of the state guard company, Capt. Charles W. Robinson, chairman. This includes in its membership many of the
experienced war drive campaigners in town and a good response with corresponding good resultis confidently hoped for.“Private Wesley Hawkes, Jr., Company B, 101 st Engineers, who recently returned fromoverseas on the Mt. Vernon, and is at Camp Devens for demobilization, enjoyed a visit from hisWestford and Melrose kinspeople, Sunday, and on Wednesday he, with two soldier comrades,
were visitors at the home of his aunt, Mrs. A. W. Hartford. Wesley is in splendid health and glad
to be at home after a fine record as a soldier. He enlisted on his eighteenth birthday, and on his
nineteenth birthday had orders to go ‘over the top,’ and has seen much active service on the
fighting line.
“Those having the roads in charge have been trying out a new plan this spring for leveling the
rough places. Perley E. Wright, with one of his heavy Reo trucks, with two scraper arrangements
attached, and in addition a heavy brush made of birch trees, goes over the roads which combined
process fills the ruts and smoothes off the surface very well.
“Mr. and Mrs. S. B. Watson have recently had a new Buick closed car delivered to them.
“About Town. Daniel H. Sheehan, who has been sawing lumber in Maine all winter, has
returned to his farm in Westford, just in time for his usual large acreage of planting.
“At the recent annual corn exhibit at Amherst to test germination, the average germination was
96%. The Old Oaken Bucket farm, who entered as a matter of ‘help the cause along,’ received
second prize, the corn testing for germination at 96.6%, which was slightly above the average
germination test. The ten-ear exhibit and over nine inches long, and purely as a show exhibit, the
Old Oaken Bucket received second prize, and popcorn third prize. Well, we are satisfied that as a
believer in raising more corn we were contributors to stimulate enthusiasm and whether we
receive a ribbon is very much in the immaterial class.
“The town teams have been hauling gravel from the John H. Decatur farm onto the surplus
mud on the Lowell road.
“Forge Village. Rev. Thomas L. Fisher will preach at St. Andrew’s mission Palm Sunday.

“Interesting Letter. The following letter, giving an interesting insight into the life led by the
cavalry men in the United States army, was written to Patrick Elliott, Forge Village, by his
brother, James Elliott, of the same place, from Douglas, Ariz., where he is stationed with the 1st
U.S. Cavalry….
“I never sat in a saddle until I came down here and now I get along very well considering all
the antics we are put through. We are taught to ride lying on our backs with head to the rear and
horse galloping, vaulting to and fro from the saddle at a gallop, and standing on the horse’s back
at a fast pace….
“I expect to be discharged soon and so we will probably meet again in the near future. Jim
“Graniteville. Plans are now under way here to form a fast baseball club this season, to be
known as the Abbot Worsted Company team. This club will have new equipment and will secure
a fast semi-pro battery. The rest of the team will be comprised of the best players from
Graniteville, Forge Village and Westford. It is the intention to play all the strongest teams in
Lowell, Lawrence and in the surrounding towns. This club will be in charge of an athletic
committee composed of W. R. Taylor, A. R. Wall, Edward Defoe and Mr. Scott.

“NOTICE
“Board of Health
“Westford, Mass.

“The Board of Health has appointed the public health nurse Miss Agnes Wier, R.N., agent and
secretary of the board. Physicians and householders must send all communications and notices
direct to her. An office has been established at the selectmen’s room in the town house for
consultation. Office hours every week day except holidays at 8 to 8:30 o’clock a.m., and 1 to 2
o’clock p.m. Telephone 41-2. Mothers and children are especially invited.