Welcome to the Westford Historical Society’s self-guided 45-minute Artist Tour of the David P. Christiana’s Sculptures in Westford Center. Start your tour at the Westford Museum (2 Boston Rd.), Follow the directions and walk, bike, or drive to the next sculpture, there is a video of the artist’s perspective for each of the five work of art you will be visiting.

* (Directions) Start your tour at the Westford Museum

Local Artist and Westford Firefighter, David P. Christiana has created this memorial monument to recognize the 280 men that represented Westford during the Revolutionary War including Col. John Robinson, who assisted with the command of the troops at the North Bridge, April 19, 1775, and served under George Washington, during the siege of Boston.

Drum Transcription: “This Memorial Battle Drum is dedicated to those Minutemen and Militia of Middlesex County who opposed the British Regulars on the historic site at the North Bridge in Concord Massachusetts April 19, 1775

Maj John Buttrick of Concord, Lt. Col. John Robinson of Westford & Capt. Isaac Davis of Acton led their men to the Bridge that the British Regulars has taken and guarded. The Regulars fired on the Americans killing Capt. Davis and Pvt. Hosmer.

The Americans battled back taking the bridge forcing a British retreat. More Middlesex men battled British Regulars in a running battle back to Boston.”

*(Directions)  Turn Right out of the Westford Museum parking lot on to Boston Rd., take a right on Lincoln St. Lincoln and Main St. merges, the Public Safety Courtyard is on your right between the Old Center Fire station (51 Main St.) and Town Hall (55 Main St.)

Fletcher Granite of Westford acquired the Black Granite and worked the stone to David’s design. Much of the site preparation work was done by David and fellow Firefighter James Lamy. Al Garside of Garside Granite in Westford helped them form and pour the footing that would support the large granite block. Ideal Block of Westford graciously donated paving stones to match the existing ones in the courtyard and donated the cost of installation and labor.

Exactly 12 years after the infamous terrorist attack, which killed thousands, Westford honored its victims by unveiling a new 9-11 memorial. The ceremony included dozens of law enforcement officials and former and current military personnel, as well national, state, and local politicians, who wanted to show their support.

After watching his daughter Ayla Brown, a former American Idol contestant, sing a powerful rendition of the National Anthem, former U.S. Sen. Scott Brown told the audience of residents and memorial donors, “We are all here because we all remember what happened 12 years ago and what we were doing,” he said. “This monument is a reflection on the town of Westford, the remembrance committee and each and everyone of you, your time, your money, your prayers, to make a difference that will last forever.”

The memorial’s creation was spearheaded by the nine-member Westford Remembers 9-11 Memorial Committee, funded by more than $20,000 in donations from residents and businesses, according to the committee’s chairman Nancy Cook, and designed by Westford Firefighter and EMT David P. Christiana.

The monument featured everything from a green sea glass base representing the fields of Pennsylvania, a cylindrical pillar representing unity and strength of the country, a hand-sculpted bronze relief of the New York Twin Towers and all the names of the fallen state residents. At the top is a beam from the fallen World Trade Center tower two, surrounded by stainless steel flames.

*(Directions) As you leave the Public Safety Courtyard turn right towards Town Hall, Continue down Main St. towards the Roudenbush Community Center (65 Main St.). Take the path on your right immediately after the Community Center on to Whitney Field, the Rajiv Paluri Rose Relief will be on right.

Rajiv Paluri, 13, of Westford, MA, passed away on Saturday, January 17, 2015 from injuries sustained in a skiing accident in Westford. Born in Buffalo, NY, he was the son of Srini and Rahhika Paluri.

Rajiv was an 8th grade student at the Blanchard Middle School in Westford. He was an excellent student, who was well liked by his fellow students and the staff at the school.

Rajiv’s favorite subjects were zoology and geography. He loved the “Harry Potter” series, played soccer and basketball, and was an avid fan of all the Boston sports teams, especially the Red Sox. He knew the statistics of all the players. Rajvi was a member of the Blanchard School 8 White Ski team.

*(Directions) Head back out the way you came, please note the sidewalk ends a short distance ahead on this side of Main St. Use the pedestrian crosswalk in front of the Roudenbush Community Center cross over Main St. to the other side of the road and continue down Main St. toward Depot St. note: Main St. bears to the right, keep going straight you are now on Depot St. Follow Depot St. until you reach the 2nd set of  pedestrian cross walks in front of 16 Depot St. Cross back over Depot St. the Westford Knight Sculpture is on your right before you reach the Abbot School.

The Westford Knight Sculpture (2015)
Located:  On the sidewalk in front of 17 Depot St.

Although the exact origin of the Westford Knight carving remains unclear, the Westford Remembers Memorial Fund unveiled the newest enhancements at the Depot Road site, ensuring the carving is protected so future generations can also ponder its existence.

Westford Remembers Memorial Fund member and local firefighter David P. Christiana spent two months carving the 500-pound statue, but the entire project took about a year and a half to complete, he said.

“Not everyone agrees that this is really a historical site. Many different suggestions have been made over the years, including Native American, Viking, and Scottish carvers, as well as modern carving on a rock shaped largely by glacial forces. What do you think? If you’d like to see a clearer copy of the carving, there is a releif located on the 2nd floor of the Westford Museum, which is open Sundays 2-4pm, come take a look.

As you stroll back to the Westford Museum listen to the AUDIO story of Prince Henry and Westford Knight, created and performed by Leeny Del Seamonds (13 min.)

*(Directions) Head back to the Westford Museum. Cross again over Depot St. at pedestrian
crosswalk and stay on the right side of the street until you reach the First Parish Church (48 Main St.) 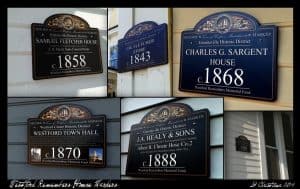 *(Directions) In front of the First Parish Church, (48 Main St.) use the pedestrian crosswalks and cross to the Westford Common, turn right and cross Boston Rd. then turn left to visit the location of the “original” Westford Academy. Note:*You will see 2 granite benches and a large granite slab, the original front step of the Westford Academy.

At this location you will find the newest rendering of the Westford Remembers Historic House Sign.  A QR code has been added! When you scan the QR code with your phone it will access a short video “Hidden History of Westford”.

Back at the Westford Museum, by the front door, you will find another Hidden History Historical Marker with a QR code. Stop and watch the evolution of the building from school to fire station to museum.

I hope you enjoyed your tour.

The Self Guided Artist Walk of the David P. Chrisitiana Sculptures in Westford Center is
sponsored by Westford Family Funfest.
The Westford Family FunFest-programs, events, organizations and more for Westford is a component
fund of the Greater Lowell Community Foundation.

Filming and Editing by: George Rosatone