The Westford Family included a doctor, nurse, lawyer, and artist, and there are connections to other places like Cape Cod and Florida. Lillian, Mary, and Sarah “Carrie” Atwood were lifelong Westford residents. Grace (Atwood) Millett was a nurse in Westford into the 1950s, and featured in the museum’s medical exhibit. Her son, William “Bill” Millett was a local artist, and last of the family to live in Westford. Bill died in 2007, and his estate donated a large portion of his possessions to the museum in 2008.

The bulk of the collection was donated by Atwood-Millett relative Deborah Stein Sharpe in 2008, and items exhibited are from this collection unless otherwise stated. 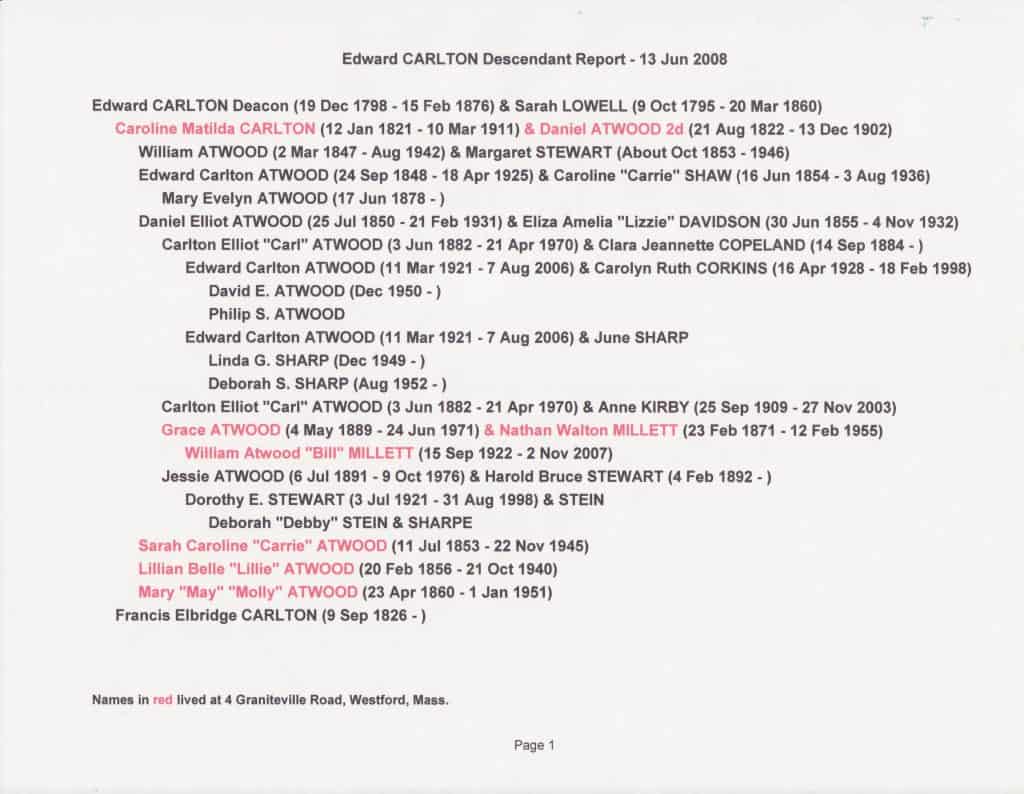 Please click on blue headers for more information on objects

Daniel Atwood (1822-1902) and Caroline (Carlton) Atwood (1821-1911) moved to Westford by the 1850s, running a farm off Concord Rd. By the 1880s, Daniel retired from farming, and built the family home on Graniteville Rd. His son, also Daniel (1850-1931), stayed on the family farm. William Atwood Millett (1922-2007) lived in the family home on and off throughout is life, often traveling for his art, and was the last of the family to live in Westford. The Atwood Collection were items found in this family home.

Framed photo of Sarah (Lowell) Carlton (1795-1860), wife of Edward Carlton. Enhanced by painting. She was the grandmother of Daniel E. Atwood.

Framed photo of Edward Carlton (1798-1876), husband of Sarah Carlton. Enhanced by painting. He was the grandfather of Daniel E. Atwood.

This collage represents the Atwood-Carlton family (click here for IDs). It is within a wooden frame with twelve metal framed daguerreotypes surrounded by a velvet grid. At least four photographs were done by S. Shattuck of Lowell Mass.

The Daguerreotype was invented in 1839 by Louis-Jacques-Mandé Daguerre. They are a positive image on a copper plate, which was polished, often with a silver coating. The technology was succeeded by the less expensive Ambrotype and Tintype.

Others identified are Mrs. Patterson (with her mother and daughter), Mrs. Ada Day, Mrs. Roudenbush, Miss Loker, Mrs Felch, Mrs. Janet Wright, Mrs. Zina Ingalls, and Mrs. Alice Lambert. Ada is related to Marilyn Day, who donated the picture. William Roudenbush served as a principal of the Westford Academy (high school) for twenty-five years. The high school now runs out of another building, but “his” building is now the town’s community center, which was named after him.

A sampler textile with sewn letters of the alphabet. It was wrought by Daniel’s wife Caroline (Carlton) Atwood, who was born in Orange, NH.

Centennial program of the past Union Congregational Church in Westford, MA. It lists the Atwood sisters (Sarah, Lillian, and Mary), while Mary (“May”) is listed as a Deaconess. The family was known to be active members of this church.

The organization began as the First Parish Church, and was founded prior to the 1729 founding of Westford, according to the organization’s website. The presently used meetinghouse, at the common, was built in 1794. The organization split into two after 1826, and the historic building pictured on the program was built in 1829 at the other side of the town common. The then two organizations started to come back together in the 1930s, and became the First Parish Church United of Westford by 1955. No longer needing two buildings, the 1829 building was purchased by the Westford Historical Society in December 1998, and leased by the Parish Center for the Arts.

The cabinet is from the Atwood House. There are seven shelves inside. The object possibly stored much of the music played by Mary Atwood, who was known for her music.

The leather wallet has several compartments under the flap. It is stamped in gold “May Atwood, Westford MA.”

This quilt was presented to Caroline (Carlton) Atwood (1821-1911) by her friends from New Hampshire when the Atwood family moved to Westford in the 1850s. It has 42 squares of white muslin. In spite of the aged condition, the names of 41 friends and of Caroline’s three sons are still visible on the fabric. “Written 25th of October 1851” is also visible.

The black cowhide bag used by Grace (Atwood) Millett (1889-1971). Grace was a nurse in the town, and practiced from 1912 to as late as 1954. Grace’s uncle, Edward Atwood (1848-1925), was a doctor, who practiced primarily in Dayton, FL. The bag was also used for general travel, used by her aunt Lillian Atwood for a trip on the White Star Line ship Adriatic to Liverpool. The trip occurred prior to the ship’s scrapping in 1934. The travel stickers are visible on the bottom of the bag.

Hand crocheted granny square afghan with multi-colored squares and black edging. Found in Atwood House. Attributed to Grace (Atwood) Millett, who may have made it in the 1960s.

Twelve crocheted diamonds attributed to one of the Atwood sisters (Sarah, Lillian, or Mary). They were made to be sewn together in a coverlet (bedspread).

This US flag from the Atwood House is attached to a wood pole. It has 46 stars, showing it was made prior to the statehood of Arizona, New Mexico, Alaska, and Hawaii.

The framed artwork are by William Atwood Millett (1922-2007). They are primarily watercolor, but one self-portrait is a charcoal sketch.

Bill Millett, born in Brockton, MA, was the last of the family to live in Westford. He was the son of Grace (1889-1971) and Nathan Walton Millett (1871-1955). Bill served during WWII in the US Navy, and professionally trained to be an artist in Paris after his honorable discharge in 1946. He lived in the family home in Westford on and off throughout his life, traveling to places such as Hampton Beach, NH, to paint. Much of his artwork was signed “WM” or “Millet,” the more traditional spelling of his surname. He did not sell his later works, but after their discovery in the family home after his death, many were exhibited by Westford’s Parish Center for the Arts and Guild of Boston Arts between 2012 and 2013.

All other works, undated, are from the J.V. Fletcher Library, with permission.