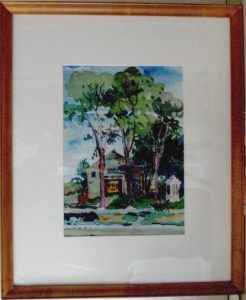 The watercolor was painted by William “Bill” Atwood Millett (1922-2007) prior to 1970. It features the northern tip of the Town Common. At least two features are of significance. The first is the town’s War Memorial. It was erected in 1924 to be representative of all wars entered into by the United States. Henry Norton of Winthrop and L.P. Palmer of Westford’s Graniteville designed the monument, and it was built by T.F. McGann & Son of Boston. The base features local granite, while the upper stones are from Westerly, RI. A bronze eagle adorns the top. Bronze plaques honor Westford residents that served during the Colonial Period (1675-1763), Revolutionary War, War of 1812, Civil War, Spanish American War, and WWI.

The second feature is the school bus garage, torn down around 1970 to make room for the town hall parking. This bus was owned and driven by Edward T. “Uncle Ed” Sullivan (1909-1980), who lived next door to the garage. Sullivan was a lifelong Westford resident.

Bill Millett was a local artist, who studied in Europe in his youth, and last of the Atwood-Carlton-Millett Family in town. He signed his work with the more traditional “Millet” spelling. After his death, his artwork was exhibited at the Parish Center for the Arts in Westford and elsewhere until 2012, while much of his estate was previously donated to the Westford Museum by his cousin, Deborah Stein Sharpe, in 2008.