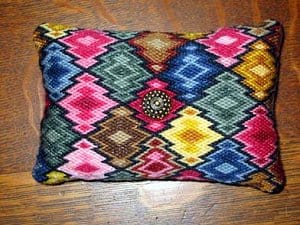 In 1764 Huldah Perley of Boxford, Massachusetts married John Robinson of Topsfield. They bought land in Westford, Massachusetts and set up house. John Robinson became famous as an officer in the militia at the North Bridge in Concord and later as Colonel of a Massachusetts provincial regiment. By the time the American Revolution started in 1775, the Robinson’s had five children between the ages of 9 months and 9 years. Among Mrs. Robinson’s many household duties was sewing and mending clothes for the entire family. Her pincushion must have been used nearly every day of her life.

It is not known exactly when Mrs. Robinson made this pincushion.It may have been one she made as a girl and brought with her to Westford, darning the holes as it became tattered and worn. She may have made it later in life, after her husband died, for the buttons are said to have been from Col. Robinson’s waistcoat. Or perhaps it was made from the remains of an old upholstery fabric that was no longer needed, as suggested by the fact that the design is not centered. In any case, the pincushion was well used, repaired, and used even more. After Mrs. Robinson’s death in 1812, it was passed down through the Robinson family until it was donated to the J. V. Fletcher Library and subsequently to the Westford Historical Society in 1983. It is now on display at the Westford Museum along with other artifacts from the Robinson’s home in Westford.

Mrs. Robinson’s pincushion is worked in Irish stitch on 28 count linen. Each of the cells outlined in black has a regular shape, but the color patterns within each cell vary, adding an element of randomness to the piece. As yellow and green dyes tend to fade more, the faded piece is currently dominated by blues and reds. However, it originally included yellows, tans, and most likely greens as well.

The back side of the pincushion is two pieces: one a needlework in a different pattern of the Irish stitch, and the other a small piece of damask cloth. The two are pieced together as if the maker had not enough of either one. The corner buttons are handmade. The origin of the center button is not known, but there is evidence that it was an original part of the pincushion, and not a later addition.

The instructions included in this kit are for a close reproduction of the top of Mrs. Robinson’s pincushion. The original was a 28 count Penelope linen fabric with wool yarn. The fabric in the kit is 25 count, 100% linen, and the yarn is 100% wool. The pattern is the Irish stitch, a very common stitch of the time, similar to a bargello stitch today. The cell outline is duplicated exactly, but the overall design has been centered on the pincushion, unlike the original. The colors are chosen as closely as possible, based on current knowledge of 18th century dyes and close examination of the original pincushion. There does not seem to be any regular color pattern in the original, which made each cell an individual color challenge. The result is that although each cell is exactly the same shape, each has a unique color pattern.

The reproduction and kit were produced by Penny Lacroix, a Westford fiber artist interested in Revolutionary War history. Special thanks to The World in Stitches (Littleton, MA) for their generous support in the production of this kit, and to Stephanie Upton, an independent museum professional and needlework specialist, who shared her expertise on historical needlework and color selection.

The kit sells for $30, and all proceeds from the sale of this kit go to the Westford Historical Society. If you encounter problems with this kit, please contact or visit us.

To purchase a kit for Mrs. Robinson’s Pincushion, visit the museum store.