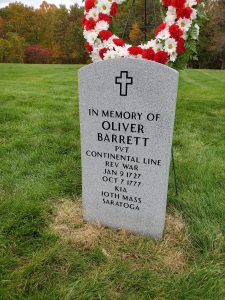 By the start of the Revolution, the town of Westford was a well-established farming community which had already supported three to four generations of New Englanders.  Starting out as the West Precinct of Chelmsford in 1655, Westford obtained its own town charter in 1729.  By 1775 the population was almost 1200.  In the decade leading up to the Revolution, Westford residents overwhelmingly supported the rising patriot cause, and ultimately, separation from Britain.

In 1774, Boston patriots proposed a non-importation pledge known as the “Solemn League and Covenant” as a means of protesting Britain’s enactment of the so-called “Intolerable Acts.”   The Covenant called for its signers to halt the purchase of British goods and, further, to stop dealing with those who refused to sign it.  Westford’s copy of the document still survives.  207 men across the full spectrum of age and social standing signed it.  Oliver Barrett was among them.

In response to the Alarm of April 19, 1775 Westford provided a significant number of militia and minute-men – 131 in all.  When the alarm came Oliver had already been training with the newly formed minute company which had been drawn from the two established North and South foot companies.  While it’s generally assumed that the younger men were selected for the minute companies, not so in Westford.  In fact, the age distribution of the men who served on April 19th was essentially the same for all three companies, with Oliver at 48 among the 11 oldest.  As his fellow townsman Peter Brown would later describe himself shortly after the Battle of Bunker Hill, they were “hearty in the cause.”

Following the events of April 19th, Oliver enlisted in the siege army around Boston under Col. William Prescott along with at least 57 other Westford men.  Based on his months of service he very likely participated in the Battle of Bunker Hill where three of his townsmen fell.

The eight years of the war would see over 280 Westford men support the effort in the militia and Continental Army.  While most of the Westford men who joined the Continental Army enlisted in the 6th Massachusetts Regiment, Oliver, along with two others, enlisted in the 10th.  Outside of New England, they served at such places as White Plains, Valcour Island, Cherry Valley,

Saratoga, Valley Forge, and the final siege at Yorktown.  Some served through the entire war.  At present 23 are documented to have died during service, though there were almost certainly more.  Oliver Barrett, along with Samuel Keyes and John Parker granted their final service here during the 2nd Battle of Saratoga, with their sacrifice helping to turn the tide of the Revolution. 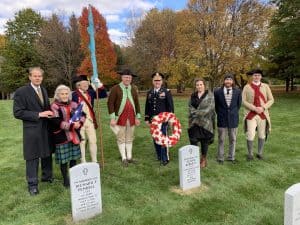