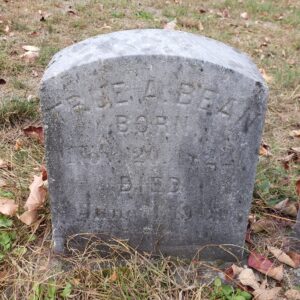 When True Bean died at the Westford Town Farm, people in town erected marble markers for True and his wife Mary. * The couple had no children and no money. Town people honored True even more when they paid funeral director J.A. Healy $ 27.90 for his burial when Healy had recently buried Ray Baker who had similar resources to Bean for just $ 10.00.**In 2001, the town of Westford accepted True Bean Way as an official town way.

But who was this man who died as a pauper, yet is given such high esteem and notoriety from his fellow Westford citizens?  He seems to have known everyone and to be everywhere during the time he lived in town. The only thing that he owned when he died was a violin which he played for staff and inmates alike.

True A. Bean was born in East Charlestown, Vermont around 1822 to Ebenezer and Comfort Bean. He came to Westford as a day laborer for the Stony Brook Railroad when the railroad was being built in town.  His main occupation was a wheelwright, but most folks said he preferred to hunt and fish.

In 1848, True Bean married Mary Ann Blake who was twelve years older than he.  Mary was a rather prominent citizen in town. Her great uncle Caleb Strong had been governor of Massachusetts and her father had been Westford’s town minister from 1792 to 1826. The marriage caused quite a commotion, one local citizen said that “she married beneath her position.” True was characterized as a ubiquitous, and somewhat irresponsible. Yet, a wholly interesting type of New England character.”

When the Civil War broke out in 1861, True enlisted in the union army and served with the 4th Illinois Cavalry. Mr. Bean served in the Illinois Cavalry because he joined the union army while visiting his brother in that state.  After the war, True did a variety of jobs including Sealer of Weights and Measures for the town of Westford, a position he held for many years. He also worked as the janitor for the Westford Town House (Westford Town Hall) and helped install the shelves for the new library. In fact, True was listed as Town Librarian in the 1871 town report.

The Bean’s lived at 14 Depot Street for many years and were described by locals as friendly people who were highly respected. Lifelong Westford resident and town historian Allister McDougall remembered True when he was a boy. Allister remembered him as a great teller of stories and everyone’s friend, young and old alike.

Mr. McDougall recalled that when he was around 10 years old, he and his cousin who lived next door to True, drove down to the farm and visited with Mr. Bean. Allister recalled that True pulled out a violin he had under his bed and played for the boys. McDougall said they really enjoyed the visit and they thought Bean did as well. But Allister McDougall remembered how barren his room was compared to his comfortable home on Depot Street.

George W. Goode who was a writer and was married to Susan Litchfield who was one of the last surviving members of the Reverend Litchfield family of Carlisle became a friend and admirer of True Bean. Mr. Goode said of True, that he had “never known a more kindly heart, or a better lover of nature. The ways of the woods, the notes of the birds, were a matter of deep sentiment to him willingly.”

But life did not end well for True Bean. When his beloved Mary died in 1895, George Goode wrote that True’s star seemed to have set”.   The last time Goode met with his old friend; he was sitting on a hammock under a tree across the road from the farm.  Goode said he was totally unreconciled with his life, but as always, the kindly True Bean gave credit to the farm’s caretakers Mr. and Mrs. Sam Balch who had treated him so kindly.

True Bean died at the Westford Town Farm on June 4, 1905 at the age of 82 and is buried alongside his wife Mary in the Fairview Cemetery.