When Rick Bradley graduated from Westford Academy in 1963, he left a stellar record. During Rick’s senior year, he 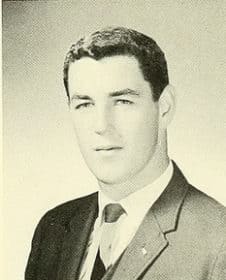 served as Student Council President and in sports he was a talented running back for a Grey Ghost football team that had a perfect record and won the Class D Championship. Rick was also a member of the W.A. wrestling team that also went undefeated and won the Massachusetts State Championship.

After graduating from Westford Academy, Bradley entered Boston College where he majored in Economics. While at B.C., one of Rick’s college friends informed the Eagle’s wrestling coach that there was a good wrestler from Westford on campus named Rick Bradley. Bradley would join the team and would eventually become captain of the squad.

Following his graduation from Boston College in 1967, Rick began his 26-year career in the United States Navy. The Westford resident earned his commission via Aviation Officer Candidate school in 1967, graduating first in his class. A year later he was designated as a naval aviator.

Later, Bradley would reflect on what attracted him to aviation, “Like any other kid, I was attracted to the mystery of flying. I believed that of all the different jobs in aviation, fighter aviation would be the most challenging, unique, and elite.” Rick went on to say that “there are a lot of people who fly airplanes. But there are only a few people who fly or who have flown airplanes off aircraft carriers at sea.” He also stated that the greatest challenge on aircraft carriers was landing and taking off at night.

During his Naval career, Captain Bradley served two combat tours over Vietnam. On his first cruise he flew F-8J Crusaders from the deck of the USS Bonhomme Richard. During his second cruise to Southeast Asia, he flew missions in the F-4B Phantom from the deck of the USS Coral Sea. Throughout these tours he earned the ominous call sign, “Warlock” along with over a dozen Air Medals for valor in combat.

Upon his return to the United States, Bradley transitioned to the F-14A Tomcat and graduated from the Navy Fighter Weapons School, which is commonly known as Top Gun. While serving as the Commanding Officer of the VF-213 “Black Lions”, Captain Bradley led his squadron on cruises to the Western Pacific aboard the USS Enterprise. He also served as the Commanding Officer of VF-124, the Tomcat Fleet Replacement Squadron.

In addition to his flying tours, Captain Bradley served as a student and then a professor at the Naval War College in Newport, RI. He ended his career in Pearl Harbor, HI, serving on the staff of the Commander in Chief, Pacific Fleet.

While serving in the U.S. Navy, Bradley received numerous medals for his service and valor including the Navy

Rick Bradley, who was the older brother of Hall of Fame LPGA golfer Pat Bradley once admitted that Pat was the famous one in the family and did admit that he wished that his golf game was better. But then again, he mused “she can’t fly an airplane.”

Sadly, Captain Rick Bradley died shortly after retiring from the United States Navy at the age of 53, leaving behind his wife, Christine and daughter, Shannon, who is also a Boston College graduate. He left a stellar record as a Navy pilot and squadron commander. His skill and heroism will long be remembered. Westford and Westford Academy will also remember its star athlete and pupil who left a lasting mark on his country and the town of Westford. He is interred with his parents in the Massachusetts National Cemetery, Bourne, Mass.