Exhibited in the museum 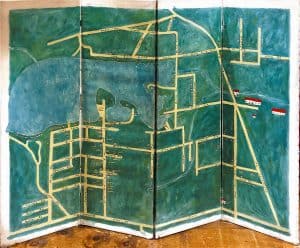 The large, folding map was hand-painted on canvas in the 1940s. The area around Nabnasset Lake was primarily a summer community for Bostonians. While the town grew throughout the twentieth century, the area became home to year-round residents, and now encompasses historical town villages like Brookside and West Chelmsford.

Our map was painted by Melvin Wilson (1910-1978). He and his wife, Eleanor, had a Nab summer home on Elm Rd in the 1940s. He was the father-in-law of Westford resident Sandy Shepherd. The map was donated by Melvin’s daughters.