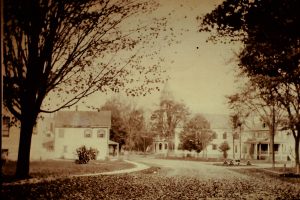 Meet at the Westford Museum for a Sunday afternoon stroll through historic Westford Center. Hear what Westford center looked like 100 years ago and learn more about the homes, churches, and public buildings that are still standing today. This will be a 45 minute walk followed by a discussion of the tour at the Westford Museum. Grab your water bottle and walking shoes and join Ellen Harde as Westford resident Kate Hamlin (1847-1937) for a Sunday afternoon stroll down Main Street, Westford MA. RSVP  by August 16th.

Suggested Donation $5 per person/ $10 per family

New to our Stores 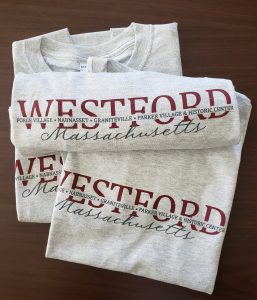 Place your order on-line and pick them up at the Museum or visit us during office hours MWF 9-1 and Sunday 2-4. 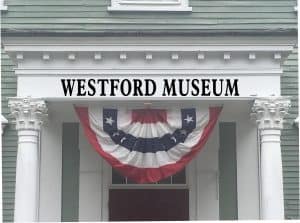 We Need a Sign!
For years the Westford Museum has been apart of
the historic Westford center,but few people know where to find us! A solution is to put our name “Westford Museum” on the outside of the building for all to see, a simple white sign that fits on the front fascia with 8” lettering is $280.

For just $20 you can donate a letter! Please consider making a contribution to the Westford Museum Sign Fund. 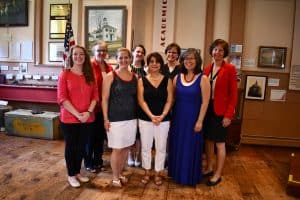 May 2, 1727, was voted by the inhabitants of the westerly precinct of Chelmsford  (Westford still part of Chelmsford at this point) to be the minister.  Pay 80 pounds for the first year, and then a raise of forty shillings a year until it came to 100 pounds a year.  This seems to be the first step in the organization of what would become Westford’s first church.

Farmer- in 1727 he  bought 18 acres of land from Josiah Burge- west side of Main Street.  Also owned land  in Providence Meadow.

Over the years he had several issues with the town in regard to his pay, initiating a lawsuit in 1740.

Starting in 1772- he began to have health issues and substitute  ministers were appointed by the town.

September 1774 the town voted “to dismiss Rev. Willard Hall from any further service in the town as minister, provided the church should think it proper to dismiss him from any further service in the ministerial office in said church”.  They did raise 42 pounds for his support that year in case the church did not dismiss him.   The town searched for another minister, agreeing to pay Rev. Hall  46 pounds quarterly for the rest of his life.

Rev. Hall was among the last of the Tories in Westford, and due to his political beliefs in Sept. of 1775, the town voted to refuse any further financial support.   His dismissal was finalized in the Jan. 1776 town meeting ending 48 years of his Westford ministry.

After his dismissal, Rev. Hall kept possession of the church records, instructing his wife to keep them after his death until his estate was settled.He died March 19, 1779 at the age of 77.  His wife died Oct. 20, 1789.

Save the Date: 225th Anniversary of Westford Academy

click here to: Reserve your seat on the school bus.
Sponsored by The Westford Academy Trustees and The Westford Historical Society & Museum.

Save the Date: Annual Meeting

Wednesday, October 23 at 7:00 pm at the Westford Museum

This year’s annual meeting will feature an “Older Than Me” Pop-up Museum! More details to come!