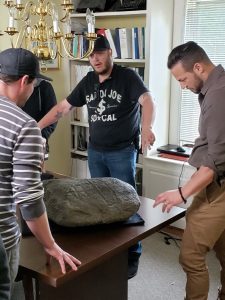 Viking Boat Stone in the Cottage!

Kanga Productions was in town working with society member David Brody and filming a story on the Westford Knight and the boat stone. The stone, owned by the Historical Society, is on display at the J.V. Fletcher Library. The crew moved the 250 pound stone across Main Street on a dolly to the cottage for filming.

A Short History of The Boat Stone by David Brody

The Boat Stone is an artifact which some historians believe is related to Prince Henry Sinclair’s 1398-1399 expedition to Westford and the Westford Knight carving. The stone itself is a 250-pound glacial erratic boulder of felsic composition.

It boasts a carved face featuring 3 images:
• A sailing ship in the style of a knorr, a medieval cargo vessel typically used for ocean travel to such 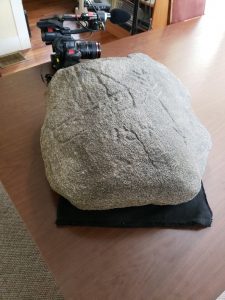 destinations as Iceland, Greenland and Vinland.
• An arrow in the style of a medieval crossbow arrow.
• The numerals “184.”

The Boat Stone was found in the 1920s when Groton Road (also known as Route 40), which historically served as an ancient Native American trail, was being widened in the western part of town near the intersection of North Street. This location is approximately 2 miles upstream (following the Stonybrook River and a small tributary) from the base of the hill upon which the Westford Knight carving is located. The Boat Stone was studied in 2007 by forensic geologist Scott Wolter, in his St. Paul, Minnesota laboratory. Wolter opined that the weathering patterns in the carving indicated that the carving was not modern and that the weathering was consistent with that of a 600-year-old artifact. He wrote, “All of the man-made surfaces exhibit a weathering profile that is indistinguishable from the weathering profile of the glacial age surfaces” (indicating long-term exposure to the elements). Wolter further determined the carving was made using a “pecking” or “punch-hole” technique with a metal tool, similar to the technique used to carve the Westford Knight carving. Approximately 184 paces from the Boat Stone’s original 1920s location there exist the remains of a 40×32 foot rectangular stone foundation which some researchers believe may be the vestiges of the winter encampment site used by Sinclair during his 1398-1399 expedition.

The Boat Stone is currently on loan from the WHS to the J.V. Fletcher Library, where it is displayed on the ground floor.

Recently added to our Website: What is hidden beneath the grassy pond? 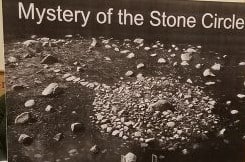 Painting is complete for our new permanent exhibit! 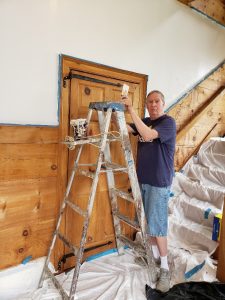 The front hall of the museum is freshly painted thanks to Jim VanBever and Deb Banerjee. The new exhibit will be called, How we have Changed: Timeline of a Building From a Schoolhouse, to a Fire Station to a Museum. Jeff Henry did the research, designed by Deb Banerjee.  The new exhibit panel have been ordered. Can’t wait for you to see the end results!

The historical society is looking into the possibilities of restoring the carriage house at 63 Main Street as a storage unit for our collection and artifacts. Please take a minute and complete the town’s task force survey if you think this might be a good idea.

The 63 Main Street Task Force is seeking feedback from the public to complete a survey for recommendations and ideas regarding the future use of the residence which was designed in 1893. Also known as the Donald Cameron House, the house is a stately two and one-half story, 10-room Colonial Revival home in Westford Center, with a deep connection to Westford’s past. For more information on the history of 63 Main Street, a video of its current condition and to access the survey go to: https://www.westfordma.gov/1218/History-of-63-Main-St. The survey closes July 15th. The Task Force will also be sharing photos, videos, and chatting with Westford Residents at the Farmers Market on the Town Common, Tuesday July 16th from 2:30PM – 6:30PM

It was a gorgeous day! The Historical Society was one of 90 vendors that had a booth on the common. The Westford Academy Museum Club helped with children’s crafts, there was a visit from the Westford Knight, and Dave Brody autographed copies of his books, The Templar in America series. We sold lots of our newest shop item, the Westford Massachusetts Baseball cap! Have you gotten yours yet? 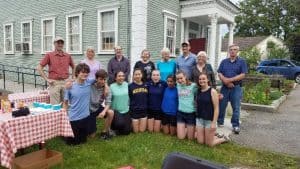 Penny Lacroix hosted our volunteer ice cream social in early June.
Thanks to  all our museum volunteers and members of the Westford Academy Museum Club!

For over fifty years, Ellen Harde has been a prominent figure in Westford through her community service, 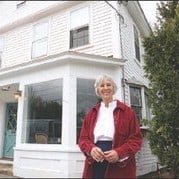 historical activism, and appearance in local government. In 1992, Harde was named Person of the Year by the Westford Rotary Club. In 2007, she was selected to receive the Middlesex West Chamber of Commerce Community Service Award, and in 2015, she was honored as the Roudenbush Community Center Person of the Year. When looking at her many accomplishments and acts of service to the town of Westford, it is clear why she is deserving of these awards. Harde has served as town moderator and chairwoman of numerous town boards. As the first female member of the Board of Selectmen in 1973, she launched the project to create the Roudenbush Community Center from the old Westford Academy building. She also started the town-wide recycling program in 1988, for which she received an award for the “best recycling program in the country for a town under 20,000 people” in New York City. Harde has proved her commitment to bettering the community of Westford, as well as to preserving the history of Westford. Today, Harde owns two of Westford’s historical buildings and works to maintain their historical value. The house on 39 Main Street, built in 1876, was purchased by Ellen and Mike Harde in 1997. Initially, they chose to buy it to save it from potential demolition or commercial use, which would be unsuitable for the historic building, but they chose to also live in the building. In 2016, the Hardes’ also purchased 40 Main Street across the street from their home. When the building was put up for sale, Harde felt the same need to save the building from an unknown future.  The general store, built in 1837, is now a locally popular muffin shop, Muffins on Main, the shop owned and run by the baker,  Pam Sulka who rents the retail space from the Hardes’. Ellen Harde’s unrelenting dedication to serving the community of Westford and all the work she has done to better the town has made her one of the most notable modern day figures. 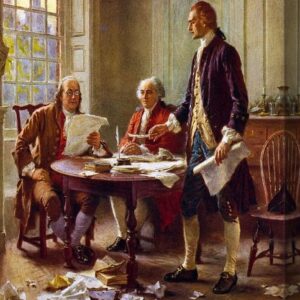 On July 17, 1776, Town Clerk Zaccheus Wright recorded the Declaration in the town’s records. What does the Declaration of Independence mean today and what did it mean to citizens throughout the Heritage Area when it was conceived and debated during their lifetime? This thought-provoking public performance piece explores these questions by integrating a reading of the Declaration of Independence with first person accounts. As the 18th century words and ideas are performed, the narrator explores their meaning to challenge the audience to consider their relevance and power today.

Are you interested in supporting our Museum and becoming a docent? Responsibilities include 4 Sundays a year, opening and closing the museum, greeting our guests, answering questions, and processing museum store sales. Please click on the link below for a brief history of Westford and begin your docent training!

“A Short History of Westford” by Bob Oliphant.

Becoming a museum docent is a great way to share your love for the town of Westford and meet new and exciting people. Contact Director@musuem.wesford,org