This year 2020 marks the 100th anniversary of the passage of the 19th Amendment, guaranteeing and protecting women’s constitutional right to vote. It began with the Seneca Falls Convention in upstate New York in 1848 and ended with the triumphant adoption of the amendment on Aug. 26, 1920.  The passage marked the largest expansion of democracy in the history of our country.

The Westford Historical Society in collaboration with the League of Women Voters of Westford and the Westford Cultural Council is working  to ensure that this anniversary and the 72-year fight to achieve it, is commemorated and celebrated throughout Westford.  Join us as Westford Celebrates Women’s Right to Vote with a look into the 19th Amendment and its legacy through book discussions, historical interpretations and more. 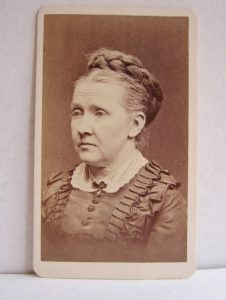 Immediately after the war, and probably for years before, to a certain extent, the question of “Women’s  Rights” was constantly brought up.  It is largely to the brave women of those days that we are indebted for the many blessings we enjoy today. When the agitation was at its height, I attended a Women’s Suffrage meeting in Boston, one day.  On the platform, sat Julia Ward Howe (pictured right), Susan B. Anthony, and many other women, all earnest workers for the cause. On the platform sat Wendell Phillips, a staunch advocate. He was called upon to speak. Absolute quiet was in the vast audience, for all knew of his eloquence.  His speech consisted simply of the following story: “In Concord, on the morning of the Concord fight, a woman walked behind the militia with a broom on her shoulder. She was jeered at and asked what she could do with that broom. She replied, ‘I can show which side I’m on!”

This meeting of the women Suffragettes was during the popular lecture period.  This period, which lasted for several years after the close of the war, was a most delightful and inspiring influence after the death and horror of four years.  Lecture courses were a prominent feature in every town, and the most intellectual and eloquent speakers were to be heard. In cities, the largest halls were filled to the very doors with eager listeners and the conversation everywhere was of the latest lecture.

When a town was not large enough, or rich enough, to arrange for an independent course of lectures, several towns would unite; a part of the lectures being given in one town and a part in other towns.  The audience then composed of subscribers from all the places. The sleigh rides over the snow to the jingling of bells was not the least of the pleasures. My memory fails me to name all those we heard: Julia Ward Howe, Wendell Phillips, Henry Ward Beecher, John F. Gough, are but a few of them.

Although far from the excitement of city life and knowing comparatively little of the questions and movements of the world at large — save that gleaned from the newspapers — news of what was passing elsewhere, occasionally, reached the quiet of the town.(REMINISCENCES Westford, Massachusetts (1847~1937) by KATE S. HAMLIN)

You can find more of Kate Hamlin’s memories of Westford on our website. 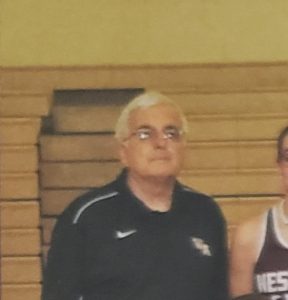 Peter Dennechuck is a third generation Westford resident, and his children are fourth generation. His grandparents immigrated to Westford from Russia to work in the mills. Having such a long line of family from Westford, Dennechuck has made some donations to the Westford Museum of personal artifacts, including a baseball card from the Abbot Worsted Company baseball team. In 1969, he graduated from Westford Academy, which was in the building of the present day Abbot school. He became the youngest elected official in Westford in 1970 as a 19 years old Cemetery Commissioner. He spent forty years working as a firefighter/EMT in Westford, and has been a track and field coach at Westford Academy for twenty-five years. Today, he is still the head coach of the Westford Academy girls indoor track and field team, as well as an assistant coach to the outdoor track and field team. Although he is retired from being a firefighter/EMT, Dennechuck is still the president of the Westford Ambulance Fund. The fund raises money to better equip ambulances in the town of Westford. After living in Westford for his entire life, Dennechuck stays because of his love for the town and community. 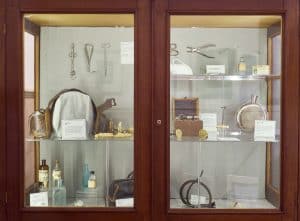 As in every town, disease and illness in Westford was inevitable. From 1850-1868 the #1 cause of death in Westford was consumption, the #2 cause was old age, and the #3 cause was Scarlet Fever. Life expectancy was approximately forty years of age. Fortunately Westford had a reliable doctor for treatment. Dr. Benjamin Osgood served as Westford’s Doctor from 1812 until his death in 1863. He studied medicine in Groton under Dr. Amos Bancroft. Dr. Osgood began his practice in 1804 in Littleton until he eventually moved to Westford and remained for the rest of his life. He lived in the center of town where the Center fire station was located.  The , implements, and medicine bottles in our hospital exhibit, were those belonging to Dr. Osgood. He used them while making house calls and visits to treat the ill in Westford’s poorhouse.

Spin to celebrate the end of the holiday season! This annual event is hosted by the Westford Spinners for fiber enthusiasts from around the region. Bring a wheel or spindle and enjoy some socializing time. This event is free and open to the public.

The DAR Good Citizens Award and Scholarship Contest, created in 1934, is intended to encourage and reward the qualities of good citizenship.