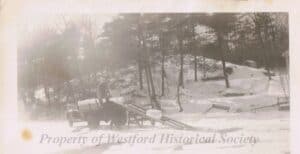 Photo of Frederick Shugrue (1908-1972) harvesting ice at Long Sought For Pond in February 1950. Ice harvesting, as a viable business, was more common in Westford starting in the mind-nineteenth century, and large-scale operations existed on Forge and Burge’s Ponds. Ice was was stored in a nearby “Icehouse” (essentially a warehouse), before being shipped to places like the Caribbean. The business wound down starting in he 1920s with the advent of “ice-less” refrigerators in 1917. The operation at Forge Pond specifically employed 175 men at its peak. By 1931, that operation was abandoned and burned down.

The photo was taken by the mother of Marion Dodge Thompson (1927-2010), Blanche Cote Dodge. After retiring in 1984, Marion became a long-time volunteer of the Westford Museum. She served on the board until 2001.