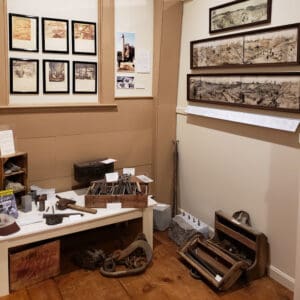 Westford has a long history in industry, with the earliest recorded granite quarrying beginning in 1826 on Oak Hill, near today’s Fletcher Granite company. Granite from here is known for its clean blue-gray appearance, “Chelmsford Gray.” The earliest operations occurred before the use of railroads, with the old horse and carriage at one point. Into the twentieth century, the two main areas for quarrying were Snake Meadow Hill in Graniteville and Oak Hill in Nabnasset. Nearly half of the active quarries in town were on Snake Meadow Hill by 1911. Snake Meadow Hill operations slowly wound down by the late nineteenth century. The sole remaining quarry in town is off Oak Hill. It is owned by the Fletcher Granite Company, founded by H.E. Fletcher in 1881. Fletcher’s Chelmsford Gray is found in found in town and elsewhere in the country.

The History of Graniteville, Massachusetts
Geoff Hall conducts a wonderful and in-depth look into the
history of one of Westford’s storied mill villages.

Where Has All The Granite Gone?

Querying in Westford started in 1600’s Westford was still part of Chelmsford – why the granite is called Chelmsford granite. Westford split from Westford when because it got too far to go to church in present day Chelmsford – Westford is west Chelmsford – split in 1729 Used granite used then in hearthstones, thresholds, stairs and dams for mills

1800’s big production boost because of building canals to Boston.  Used the granite to line the bottom and sides of the canal and after being built the canal also helped transport the heavy granite and much, much more

Click on the link below and discover just a few of the locations where granite from Westford has been used. S 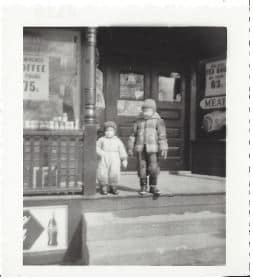 While preparing brief histories to go with the pictures for the 2002 Westford Museum calendar, I (Marilyn Day) called Arthur Pellerin for information on the store in Graniteville known as Westford Hardware.  The history of the building was not to be told in one or two sentences, so here is the information gathered from many folks.  Also, one cannot tell the story of just one store as it includes the shuffling of the post office as well.

Earliest recollections of Graniteville residents place the post office in P.H. Harrington’s Construction business located at 8 Cross Street, opposite the Sargent School.  It is now a residence. The 1889 “Walker” map shows the post office at this location.  In 1897 the Westford Directory indicated Walter Wright was the Graniteville postmaster.  During the 1930s, Harold Harrington was postmaster there. “Harold became postmaster in Graniteville in 1935 and retired in December 1965.  My parents moved to Cambridge to live in an apartment in our (my husband and my) house in 1972. My mother (Alice Payne Harrington) died in Cambridge in 1982, my father, in Cambridge, in 1984” (Mona Harrington, Apr. 2002).

In 1900 the building at the corner of Third and Broadway Streets was known as the “new store.” It took the place of the store across the mill pond on N. Main.  This new building at what is now 37 Broadway Street was owned by Sargent and housed the Post Office for Graniteville in the rear of the building, with an entrance off Third Street, and a country store in the front.

This same store, the Clover Farm store, was shown in the 2002 museum calendar.  Barbara (Mrs. George) Reeves said E.E. Gray was the earliest person she remembered running the store.  He was followed by Albert Reeves and later around 1938, his son, George, ran the store, with Barbara his wife.  George and Barbara Reeves, ran it until George went to work for the Raytheon Company.

In 1962, Norman and Lucien L. Daunais, co-partners, purchased the Clover Farm building from executrixes, Harriet C. (Sargent) Hildreth and Mary H. Sargent.  (Lucien was the father of Norman.)  But before they could buy it, the building had to comply with town plumbing codes which meant that the out-house had to be discontinued and indoor plumbing had to be installed in the building.  The post office remained in the building, and when post master Harold Harrington retired in 1965, Norman Daunais became the Graniteville Post Master.  Now that Norman was post master, he needed more help in the store and in 1968 Arthur Pellerin was hired.

By 1970, Norman sensing that he was going to have to become partners with his three sisters upon his father’s death, decided it was time to sell.  Arthur Pellerin, who was in a position to buy the building with its hardware business in place, purchased it.  Norman Daunais then went to work in the Nabnasset post office.

The second floor of the Clover Farm Store/Westford Hardware building has its own share of history.  Before the original St. Catherine’s church was built, the congregation met here on the second floor.  The Westford Grange also held meetings here.

In November of 1999, Arthur Pellerin decided it was time to retire and sold the building to James Banyas.  James held on to it for a year and in December 2000 it was bought by Kacy Caviston who has remodeled the upstairs for an apartment and the lower floor to be his contracting office.

Roger Parent bought his first store in Graniteville in 1949 from Mr. Plant of Leominster. It was the building directly across the street from the Clover Farm Store, at 38 Broadway and was the first Parent Market.  Mr. Plant had owned the building very briefly (only for one week according to Roger Parent), having purchased it from Adelard Brunell.  Roger owned the store at 38 Broadway for four years.  But by 1954 the old First National Store was sitting idle after the fire and Roger decided it was time to move to a larger building.  Roger remodeled the building to eliminate the separate meat market area and Parent’s Market then opened at 27 Broadway.  He enlarged the building in 1958.  The post office remained in Parent’s Market from about the mid-1980s until 2000. Roger retired in 1984 and today, (2002) his sons, David and Daniel carry on Parent’s Market.

[The 1899 “Walker” map shows the post office at this location.  In 1897 the Westford Directory indicated Walter Wright was the Graniteville postmaster.  During the 1930s, Harold Harrington was post master.  Additional comments added by Marilyn Day]

There was a used car lot just beyond the Idle Hour run by Francis Alling.  Francis once said of one of his used cars that one was known not to have made it as far as Broadway before it died!

[Aime referred to this intersection of Graniteville, Broadway and River as Charlton’s Corner.  This is the intersection where the WWI memorial for Adlard Langley is located.]

[181 Groton Road:  This is the site of the Long-Sought-For Baptist mission.  Just 1/2 acre.  Sold by Cornelius Keyes.  Never had a permanent pastor, just a mission church.]

The rectory at St. Catherine’s Church was built in 1927 and the church 1934. There’s a house in Graniteville that used to be right where St. Catherine’s church is.  It’s on River Street now, number 45.