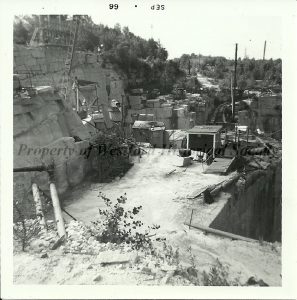 This photo of the Fletcher Quarry at Oak Hill was taken in September 1966. Saws were not yet fully introduced to the quarrying process, but introduced over the next decade. However, according to the company’s website, they did develop a joint cutting saw for making straight curb after quarrying in 1965, as well as later innovations such as a multi-diamond wire quarry saw for curbing slab directly in the quarry in 2004. Fletcher Granite Co. was founded in 1881, while nearly half of the active quarries in town were on Snake Meadow Hill by 1911. Today, Fletcher’s Oak Hill quarry represents the only remaining operation.