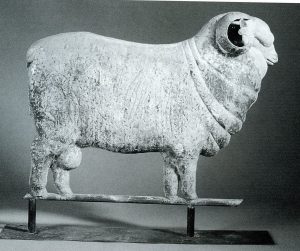 “Police said that the thieves entered the building through the boiler room, climbed up onto the roof and then used a 40’ ladder to reach the large weather vane.
“The weather vane which is fashioned of brass and has a ram affixed to the top of its pole is reported to be over 100 years old, and worth several hundred dollars.”

“The weathervane is now owned by Courier of Westford which now occupies the building.

“Carmen Frederico, the company’s director of finance, says Courier cannot care for the weathervane any more. He said it has been sitting in a vault for at least a decade, and belongs in the public domain.

“[The weathervane] will be sold Sunday at Skinner Inc. in Bolton and history buffs are trying to figure out how to keep it in town.

In a telephone conversation, Skinner would give no information as to who the buyer had been in 1997 or if they knew the whereabouts of the weathervane now. 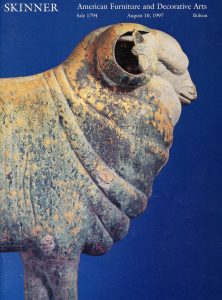 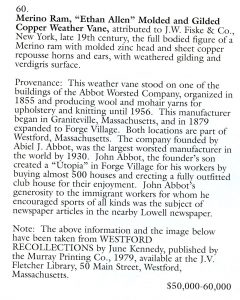