Location
This is an online meeting. After your registration is approved you will receive the link by email.


New England has long been known for producing and inspiring great writers and poets. Indeed, Boston was once known as the “Hub of the Universe,” in part because it seemed to be the center of the literary world at the time. But Westford has its own connection to one of America’s most well-known poets: Edgar Allan Poe.

The American Poet, Edgar Allan Poe (1809-1849)  visited Westford several times in 1848 and 1849, where he gave readings at the Heyward Reading Circle and fell in love with Amos Heywards oldest (and married) daughter, Mrs. Charles (Nancy Heyward) Richmond. She is the “Annie” of Poe’s letters and poem, “For Annie” one of the many women he idolized. Abner will share Poe’s poem “For Annie” as well as other great poems by 19th century New England poets. 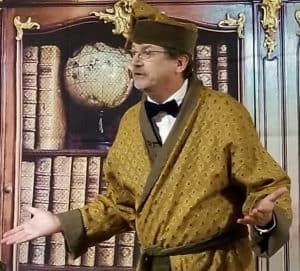 Storyteller Abner Serd has entertained audiences from all over the world with his recitations of classic 19th-century poetry. He has performed as an historic interpreter at Boston’s Old North Church, where he portrayed Henry Wadsworth Longfellow. He has appeared at storytelling events as far away as New Zealand, and has occasionally been spotted at busy street corners, reciting verse for tips. He is currently involved with an international group of poets and recitationists who meet to share their works online.

Join us for an evening of poetry and storytelling, as Abner Serd recites the works of Poe, Longfellow, Oliver Wendell Holmes, John Greenleaf Whittier, and others. $5 suggested program donation