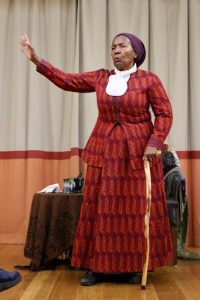 “I Can’t Die but Once” performance by Gwendolyn Quezaire-Presutti
Tubman believed in the equality of all people, black or white, male or female, which made her sympathetic to the women’s rights movement. Tubman’s role was not that of a leader but that of a strong supporter. As a woman who had fought for her own freedom and the freedom of others, Tubman set to work with her friends by touring and giving speeches about her own experiences as a female slave and as the liberator of hundreds born under the bondage of slavery. She described her years as “Moses” and the impact she had to those who found freedom. She toured New York, Boston and Washington speaking in favor of women’s suffrage rights.

Gwendolyn Quezaire-Presutti’s portrayal of historical women introduces untapped American History, drawing on a wide array of primary historical resources. For the past 22 years Gwendolyn has engaged audiences giving voice to real life accounts, struggles, self-determination and triumphs of women she portrays. Each performance is infused with her unique fingerprint giving an integral portrait of a historical woman or event.