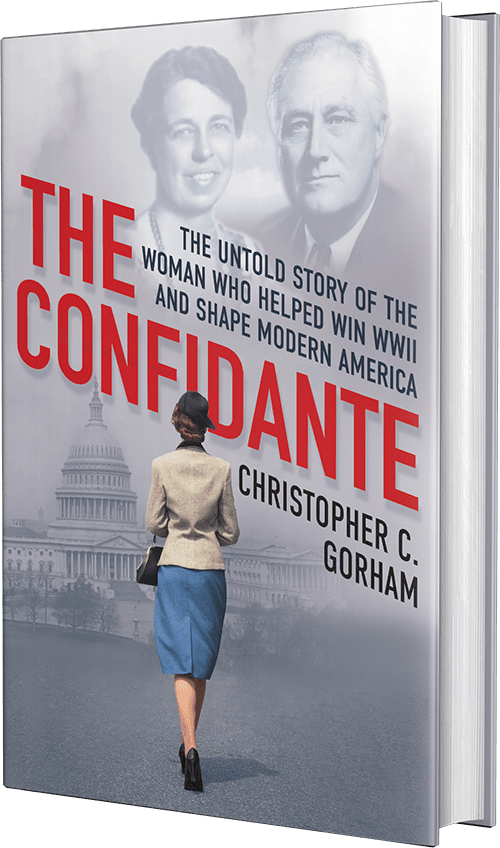 THE FIRST-EVER BIOGRAPHY OF ANNA MARIE ROSENBERG, WHOSE INFLUENCE ON AMERICAN HISTORY, FROM THE NEW DEAL TO THE COLD WAR AND BEYOND, HAS NEVER BEFORE BEEN TOLD. HER LIFE RAN PARALLEL TO THE FRONT LINES OF HISTORY—AND HER STORY, THOUGH FORGOTTEN FOR TOO LONG, IS EXTRAORDINARY, INSPIRING, AND UNIQUELY AMERICAN.

CHRISTOPHER C. GORHAM holds degrees from the University of Michigan, Tufts University and Syracuse University College of Law. After practicing law for over a decade, for the last several years he has taught Modern American History at Westford Academy, outside Boston. His writing has appeared in the Washington Post and online publications. The Confidante is his first book. He and his wife, Elizabeth, live in Watertown and Chatham, Massachusetts.

Born into a prominent Jewish family in Budapest, Hungary, in 1902, Anna Rosenberg Hoffman is most notable for having shattered the glass ceiling that separated women from the senior military establishment when she was appointed assistant secretary of defense in 1950. Rosenberg and her family emigrated to the United States and settled in the Bronx borough of New York City in 1912. Seven years later, she became a naturalized citizen and married her first husband, Julius Rosenberg.

Rosenberg began her political involvement in the early 1920s and quickly developed a reputation for expertise on personnel and labor issues that brought her into contact with Democratic politicians and activists. It was during this period of time that Rosenberg first met the Roosevelts and by 1928 she advised then gubernatorial candidate FDR on labor policy. In Washington, as in Albany, FDR continued to seek Rosenberg’s counsel, and throughout the 1930s he continually tapped her to serve the federal government in a variety of labor-related positions.

Although Rosenberg spent a considerable amount of time in Washington serving the administration, she remained active in New York state politics as well, serving as chairwoman of the New York State Constitutional Committee in 1937 and as a member of the New York City and state war councils. Rosenberg began her specific association with defense-related labor issues in the early 1940s with appointments to the Manpower Consulting Committee of the Army and Navy Munitions Board and the War Manpower Commission. FDR so trusted her judgment that he sent Rosenberg to Europe to make manpower observations about the American military. Presidents Roosevelt and Truman so valued her service that they awarded her the Medal of Freedom in 1945 and the United States Medal for Merit in 1947.

Rosenberg remained active in the defense community after the war, eventually serving as an advisor to Air Force Secretary W. Stuart Symington and then as assistant secretary of defense from 1950 to 1953. While at the Pentagon, Rosenberg worked hard to bring about the effective implementation of the National Security Act, took steps to promote racial integration of the services, and lent support to legislation that would safeguard the rights of minorities in the military.

As a prominent Democrat, Rosenberg returned to private life after the Republican victory in 1952, briefly returning to government service at the end of the Johnson Administration to serve on the Commission on Income Maintenance. In 1962, the Rosenbergs divorced and then she married Paul G. Hoffman, the first administrator of the Marshall Plan and a top United Nations official. Anna Rosenberg died in 1983, at the age of 81.